Totally forgot to take pictures of the pile of boxes, and I suppose I could milk the funny looks I got at the post office into some kind of amusing story, but the looks weren't really all that funny. Certainly not compared to the look Her Lovely Self gave me when she saw the total for postage (but as this is not an entry meant to induce guilt in any way, let me hasten to add that the total was rather a lot less than I estimated. And anyway, it's not as though any of you made me do it, right?).

So, you'll soon be getting your items, all postmarked from Maumee, Ohio, a township that has virtually nothing to do with me (although I seem to recall being married in a church there once). Most of you will get boxes with no return address. You clever folks who had the brilliant idea of living in another country and thus forcing me to fill out a customs form, my hat's off to you. Because you compelled me to reveal my identity as John St. Cecil of Melvern, Kansas. Back when I was a boy detective, not far from Melvern (a town that was in the news not long ago, for some heinous reason, which is why it was fresh in my mind), John St. Cecil was the name I decided to give if I was ever captured by bad guys. It sounded really cool. Still does. But clearly it is an identity that has now been compromised and I can never use it again.

So, aside from the dozens of you who are getting consolation prizes, that wraps up the giveaway. At least, my end of it.

Now, the rest is up to you. When you get your items, kindly let me know. You can do this by email or comments here. When you finally post about your item or your good deed in your own blog, email me a link. Yes, I'll probably find it myself eventually, but if you email me, it'll make it easier for me to add you to a master link I'm planning to set up here so that everyone will have a quick way to click over and see what everyone else did.

And now with that behind me, I can turn my attention to my real reason for being here in western Ohio, which is to meet this little person. 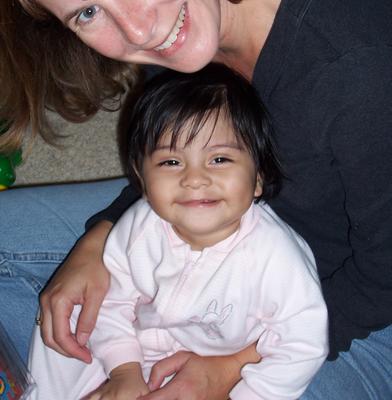 This is Grace. She is my first and only niece.

Forty-eight hours ago, she was in foster care in Guatemala, one of five babies assigned to the home of one very kind but very overworked woman.

Twenty-four hours ago, she was handed off to my sister- and brother-in-law. The jumper and diaper Grace was wearing were her only possessions (and the diaper needed changing). Due to all manner of bureaucratic snafus--the kind that makes one immediately think of the adjective kafkaesque--my relations and I have been waiting almost 10 months to meet her. She should have been here in the summer. But it doesn't matter now.

Because about 12 hours ago, I finally got to meet her.

It was late--late for babies--but everyone's schedule was screwed up and my sister-in-law said 8PM was as good a time as any. We put our own kids to bed at their grandparents and Her Lovely Self and I headed for the door. The Brownie called me back.

"Dad, when you see Baby Grace, do the Monkey Face," she said seriously.

"Yeah!" said Thomas from his bed, which was in the corner. "Babies like you!"

No one had ever said that to me before, so I sort of preened a little.

"It's true," said the Brownie. "It's because you're so funny-looking."

Preening a little less, I put my children to bed and off we went.

In the car, Her Lovely Self looked at me. I waited for my instructions.

"Okay, now we're not going to give her all the toys you brought for her. Just the thing that plays music and speaks English and Spanish," she said.

I slumped in defeat.

"Also, don't go getting her riled up with your stupid faces," she said.

"I'm serious. You act like such a clown to amuse children."

"Not when other people do it, but you make them laugh so much they throw up. It's too much."

I was silent, trying to think of something really good to say in response to this.

Finally, I said, "I have it on pretty good authority that babies like me."

HLS sighed. "It's only because you're so funny looking. Especially when you do that dumb face that makes you look like Curious George. You're not going to do it tonight. This baby is going to have to go to sleep soon so don't get her riled."

When we arrived, my sis and bro were zombies, but Grace was sitting contentedly in the living room, playing with the carpet. HLS, who develops some kind of weird condition around babies--the kind that causes her to make smoochy faces and speak in a voice high enough to upset neighbors' dogs--gathered the angel child on her lap and they enthusiastically made sublingual gooing noises at each other.

Then I poked my head in. I had on my absolute most sedate face--the one I use at work. But it didn't matter. Grace stopped gooing at HLS and turned to regard me as one would regard any other unexpected sight in a suburban living room. Such as an elephant, or a clown with a honking nose. 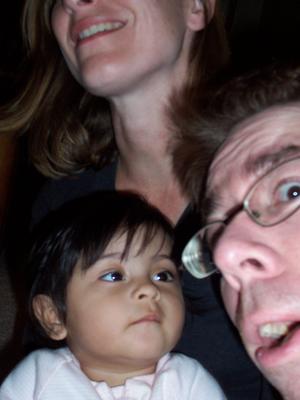 I introduced myself ("I'm MM, and I'll be your uncle for the rest of your life.") and then presented her with the chirping electronic music device that utters bilingual statements at you. She stared at it with detached interest.

"She hasn't really been smiling very much. She's so tired she must be totally out of it," offered my zombie sister-in-law.

Then Grace swung the toy at me, smashing me in the nose and cutting me under my right eye. As my glasses went flying, I made aggrieved honking noises and rolled on the carpet. Grace, though, clapped her hands together and squealed something that sounded an awful lot like "Bravo!"

After that, she couldn't take her eyes off me. I did the thing where I pretend the pink teddy bear is strangling me and she laughed at that. I let her smash me about the head and shoulders with her new bilingual cudgel and that was worth about five minutes of gasping hilarity. We got along famously.

Parents out there will know what I'm talking about--the rest of you will just have to trust me--when I say that the first time you finally get a baby to laugh, it's like you just summited Everest. You want the moment to last as long as possible. So we stayed later than we should have. Although in hindsight, that may have been a mistake.

Because Grace had been laughing and squealing for a solid 45 minutes and was starting to give me that slightly impatient look that says "What else can you do, funny man?" I decided to throw caution to the wind. Without so much as a second look at Her Lovely Self, I broke out the Monkey Face.

Grace was startled when I puffed out my cheeks. Then she laughed a tremendous belly laugh. She sucked in a fresh lungful of air to do it again...then vomited lavishly.

"Well, guess we better go," I said, glancing at my watch.

That was last night. I have to wrap this up because we're going to see her again shortly.

But I'm under orders to leave the Monkey Face behind.

Keep an eye on it for me, will ya? 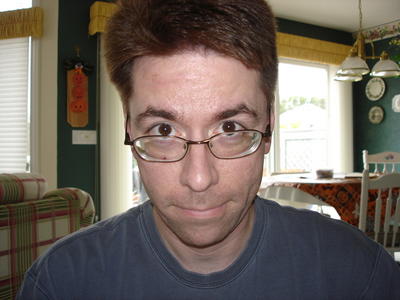 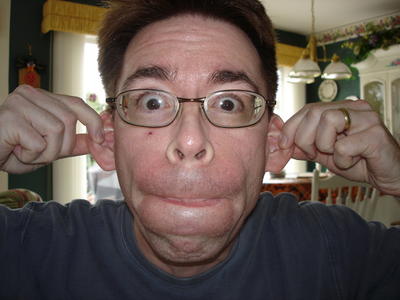 Comments:
First of all Bravo to the SIL and BIL for adopting that sweet little girl!

Secondly, I have a sneaking suspicion that the monkey face didn't stay put and hitched a ride back to the baby's house.

I think it's sweet that you were able to make her laugh for her new parents. Although, I hate to hear the "I told you so's" that HLS must have nailed you with. Can't wait to hear how the next visit went!

that is by far the oddest looking face I have ever seen another human being make. Bravo to your brevity for posting it on your blog. I can only imagine the comments it will produce.
Your niece is beautiful and my sincere congrats go out to your sis and bro...that little girl is quite lucky to have been adopted into such a wonderful family.

Best. Post. Ever. I am very impressed by your face Monkey Man. Err, Magazine Man! I also have a monkey face (I am famous for it), but alas I have not caused anyone to puke because of it! If you want, you can check it out:

I agree with shannon about the monkey face. Your new neice looks adorable, but I can see how that face could overload her. My only neice is currently in her freshman year of college. Time flies!

Ahahaha. I have a crazy/scary one I do. Maybe I'll post it someday. There's a noise that goes along with it though.

Have fun with the niece!

What an absolute angel!!!

You know I'm referring to your beautiful niece and not your monkey face, right? ;)

Awwww! She's so adorable!
Usually when they get so happy that they vomit, it's a good sign. It mean they *really* like you. ^_~

What a wonderful story! Many sincere congratulations to you and yours. What a little miracle!

What an adorable little girl :) Congratulations to your family!

I'm glad I wasn't drinking anything when I saw the monkey face ;>

Welcome Grace! She is such a cutie-patootie!

And congrats to her new parents-- and to her new aunt and Uncle Monkey... er, Maganzine Man.

The oxford dictionary has your face right beside the word Monkey Face now ... seriously ... hilarious.

And for the adoption thing. That is something that I trully believe to be an act of an angel.

Grace is beautiful girl... I can so see the many stories we will hear about her!!!

Best monkey face ever. Noted for future use when approaching babies and my bank manager.

Lovely post, feeling all warm inside right now. The air conditioning's been out for weeks.

I threw up in my mouth a little bit myself, MM.

Oh God. You are so ridiculously silly, MM. Absolutely hilarious. I can't believe you're posting pictures like that on your blog.

Add a few more years to your kids' lives and believe me, they'll be disassociating themselves from you pretty hastily if you keep doing those monkey faces.

Oh what a cutie pie she is. And what a crazy uncle she has.

The people in my office, truly think I am nuts because of some of the things they catch me laughing at. Funny

Oh this post has made me so look forward to seeing my only nephew this weekend. I'll see if I can make the monkey face for him and hopefully he'll blow chunks too. But I think that you are truly the master of the monkey face....I have much to learn from you sir.

And I thought it was cool that my cat could impersonate Yoda.

She is beautiful. God bless your sis & bro-in-law.

You are right - there is no sound so beautiful as a baby laughing. It is a universal happy sound that makes even the grumpiest ogre smile.

As for your monkey face...You have preserved the high standard and dignity inherent in every post.

Teeheeheeheeheehee!
Your monkey face DOES make me laugh! And it's not just gas, it's a genuine laugh! :)

Your neice is very enchanting with her cutie grin and smiley eyes!!

Once again, my gorgeous girlfriend is looking at me funny, but she did agree that it's a funny face. :)