Over the past few moves, I've thrown out a bunch of my kids' stuff on the sly: broken toys, favorite clothes that don't fit anymore, and countless stuffed animals. Not the favorites, not the sleeping buddies—I'm not a complete ogre—just the stuff that's gone ratty and gross and isn't played with anymore. And I know for a fact that I threw this thing out: 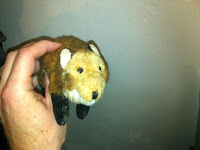 This is Squeeky. Seen here, he is so matted and abused that I couldn't honestly tell you if he's supposed to be a fox or a squirrel. The Brownie gave him his name—the fact that he came equipped with two implanted squeaky bulbs may have had something to do with that. She played with Squeeky for hours on end, possibly even years on end. But when we were packing up at our last place and I was filling trash bags left and right, I found Squeeky. Before I could hesitate, I threw him out. That was a year ago.

I've since come to regret that rash choice. Because Squeeky was a beloved toy, as beloved in his own way as the Éclair's talismanic Kitty (who sleeps with her every night), or Thomas' stuffed train (which he does not sleep with anymore, but which I know he keeps tucked away in his room), or the Brownie's pink bear that she's had since she was one year old.

But Squeeky did not belong to the Brownie. He belonged to this fellow:


The Brownie never tired of throwing that thing for Blaze, and he never tired of retrieving it for her. But I threw Squeeky out after Blaze died. It was just too hard to see it there on the floor.

You never did know where you would find it. Blaze would carry the thing around from room to room, dropping it in the most random and unlikely places: the toilet, deep under the sheets of someone's bed, carefully deposited in my shoe. When he had it in his mouth, he always worked it around to get to the exact spots in the body and tail where the squeaky parts were implanted. Then he would expertly squeak at us, as shown in the video, and to the kids' endless delight. I used to wonder if he thought that he was speaking some kind of code or doggy language to us, but then he died without confirming that fact, and every time I've seen him since, I always forget to ask.

Yeah, I still see him, but not in the way you're thinking. He shows up in my dreams a lot. I don't, as a rule, have recurring dreams, or dreams with recurring people in them, but Blaze is the exception. Once, not long after we moved into the new Magazine Mansion, I saw him in the upstairs hallway. The hallway was about 10 times longer in the dream than in real life, and it was pitch black in the middle. I was beginning to panic that I was trapped in some kind of endless corridor, but then, some distance ahead, I heard a strange but comforting whisking sound, like someone was sweeping the floor—really fast—with a broom. I walked towards the sound and eventually came out of the darkness to the girls' room at the other end of the hall.

Blaze was lying on the floor across the doorway, as he always used to when the girls were little, part nanny, part burglar alarm, in the perfect position to alert us if one of the kids got up in the middle of the night…or to guarantee a swift and fatal crotch bite to any intruder foolish enough to come anywhere near his babies.

In the dream, Blaze didn't move when he saw me. Well, except for his tail, which was whisking furiously on the floor. He just followed me with his eyes.

"Hey," I said quietly, too startled even to breathe. "I thought you were gone."

He snorted. "Please. You haven't seen the last of me."

And I woke up with a start.

In another dream, a few months ago, I was at work and my phone started ringing. When I looked at the screen, there was a picture of him, with a flashing message: "Incoming Call From BLAZE," it said.

"What in the name of Dog are you doing?" he asked.

"I insist you drag your aging haunches out of your kennel and make your rounds," he said.

A long-suffering sigh filled my ears. "Get up, you monosyllabic monkey! Instantly! The wolves are at the door! I mean, honestly." Then he hung up.

I woke in mid-leap from the bed, grabbed my trusty cricket bat and checked on everyone. No problems, all kids safe and slumbering in their beds. Then I went downstairs and found that the wind had blown our front door open (we had had furniture or something delivered earlier in the day and apparently hadn't closed the door quite shut afterward). I turned on all the lights and did a circuit of the house. Finding no intruders, I came back by the front door and saw, through the windows, a flash of motion in the darkness. I pressed my face up against the glass in time to see two coyotes--we live now in a somewhat wooded area--trotting around in the yard. Not wolves, but still. Every hair on my body stood on end as one of them turned and looked at me. His eyes flashed at me in a kind of fury. Then he and his mangy companion whirled, startled, as though something was sneaking up behind them in the darkness. Spooked, they both ran for it.

The latest dream, a few days ago, was also a phone dream. This time I got a text from Blaze. The message read, simply: KEEP YOUR EYE ON HER.

Saturday, while Her Lovely Self and the older kids were out, I left the Éclair down in the basement--she was making a birthday card for her brother in our little craft room. I was going outside to rake leaves or something, but abruptly decided instead to clean up my little workshop in the basement by the furnace. Five minutes later, I heard an ungodly crash and muffled cries. I was 10 feet away and sprinted to the craft room, where I discovered that a large cabinet had tipped over (the Éclair later admitted that she might have been climbing up its shelves), pinning my 5 year-old beneath, the weight of it crushing the breath from her. I hulked out and flung the cabinet off her. Except for a couple of bruises—and, one hopes, a lasting disinclination to climb shelves—the Éclair was unharmed, thank God. But if I'd been outside when it happened…

Later, cleaning up the debris in the craft room, I saw what I thought was a mouse, cowering under another cabinet. I never would have seen it if I hadn't been there on the floor, picking stuff up. I grabbed some gloves and reached under to catch the mouse.

But as you must certainly have guessed by now, it was no mouse. It was Squeeky.

There's no real twist to this tale, by the way. The Brownie fessed up later that she saved Squeeky from the trash and kept him safe in a box in the craft room all this time (although how he got under the other cabinet is still a mystery). I just didn't know about Squeeky because my daughter didn't want me to throw him away again. So, perhaps not the best note to end an October Moment on.

Except to say this: We haven't seen the last of him.


And I'm not talking about the toy.

Not Dead, Just in Rewrites


Sorry I’ve been away, but it’s one week to the Book Launch.

That’s right, sports fans, the global release of The Book I Wrote for My Kid is October 30—also known as Thomas’ 14th birthday—in seven short days. I just have a few notes to massage into the manuscript.

Since I first posted about this, I have spent at least a few hours every night, and most waking hours of
my weekends scribbling notes, rewriting or moving around whole chunks of story and twice, so far, firing up the editorial backhoe to fill in two gaping plot holes.

I do know this: In a long career of overdoing it when it comes to my kids’ birthdays, this may be the pinnacle. Well beyond, say, the all-nighter I pulled building Thomas a fantastic wooden train layout in the living room, or the month I spent driving across half the Midwest to find him a specific action figure.

It does, however, pale in comparison to the efforts of Her Lovely Self, who once carried him around in a bag of water for nine months, then forcibly ejected him into the world. You have to keep perspective on these things.

I don’t know how many thousands of hours I’ve spent on this book over the past few years, but I do know if I were to multiply it out based on, say, my hourly freelance rate, it would have been cheaper to buy Thomas a car. Instead, he gets a book, the slightly desperate hope of his father that it doesn’t suck, and the reassurance that, whatever efforts I’ve expended to make him this gift, he is absolutely more than worth it.

So, apologies, all. I know some of you were hoping for an October Moment, but at this particular moment in October I’m haunted by the thought of not finishing this book, and that's scary enough for me, thanks. Hope it is for you too.