In Which My Family Does Not Fail to Improve Itself Genetically... 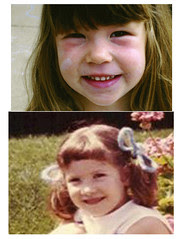 Lovely Selves
Stayed home today to try and get a few things in order before the Grandparents get here. Naturally, as soon as Her Lovely Self left to run some errands, my son and I ended up on the computer, playing around with the scanner and importing images.

He was captivated by these two. The top one being his sister (who in this image had applied chalk as makeup), the bottom one being his mother. He just kept looking back and forth at them on the screen. I showed him how to stack them in one file and there we are.

I'm getting a little sick of calling my daughter "my daughter," so I think I'm going to have to start calling her The Brownie.

When she was just a wee baby--in fact, this was the first time we discovered she could crawl--we were at a picnic with some friends. The friends brought a whole plate of brownies, which were in a picnic basket. Under a blanket. Wrapped in plastic on a plate.

Somehow, without anyone seeing her, my daughter wriggled over to the basket, got a hand in past the blanket, under the wrap and found the brownies. By the time we realized what she was doing she had mashed three brownies--three BIG brownies with frosting--into her toothless mouth.

We were a little freaked. She had only recently started on solid food, so she was really too young to be eating brownies. We anticpated a stomachache, a sugar-high to end all sugar-highs (she WAS a little amped up afterwards), some kind of reaction. But nothing bad ever happened.

Well, not counting the apocalyptic diaper she filled the next morning.

Ever since, The Brownie has had a sweet tooth to rival mine. She once consumed half of a birthday cake in one sitting (again, before we knew what happened). And this week, when a box of Easter goodies arrived (sent by my parents. Who will be here in a matter of hours. What the f--? Then it dawned on me: the truck was probably too packed with OTHER goodies), I found myself wondering aloud where all the jelly beans had gone. Take a wild guess...

But brownies still remain The Brownie's soul food, which I think is kind of funny.

See, Her Lovely Self hates brownies. Pretty much can't stand them. And come to that, HLS isn't all that big on sweets in general. So I guess The Brownie didn't pick up her sweet tooth from Mom.

But looking at these pictures, it's pretty clear The Brownie got everything else from her.

Comments:
Wow! Are you sure she wasn't just cloned?
My son came out looking just like his father - I was merely the vessel that housed him for nine months.
Does she have your penchant for pie?

Well, if your wife didn't grow out of her red hair. We have more than just blogging in common. Not your wife, just women with red hair.

Cutie pies, those two! I can totally relate to brownie radar. One of my nieces has it too, except hers is cake radar. Everybody else in my family is the type that has Halloween candy still left at Christmas... I can't understand how I'm related to any of these people.