The Resume (A Random Anecdote) 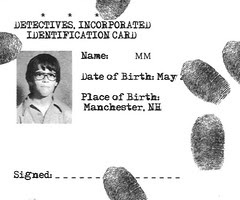 Of course, as always happens in life, when you do something you think is pretty cool and a big deal, no one else seems to think so. Most just go right on with their lives. The few who do take notice tend to do so for the wrong reasons. Or they notice the wrong things and are impressed--for better or worse--with minutia.

Take my mom, for instance, who was--I thought--unnecessarily obsessed with the fact that I had lost my book bag (and thought it suspicious that I had not also lost my books. Dang, Ma, who's the detective in this family, anyway?). I couldn't tell her what really happened, so I told her the first thing I could think of, and it was about as close to the truth as I could get: I said I had left it on the bus. (On the bus, on the barbed wire fence surrounding the bus, it all comes down to the same thing, right?)

Melinda was impressed when I gave her the details of the case, but that was less than ideal. For one thing, after I told her what Shawn and I had done to get the dog, she apparently developed some kind of crush, first on me, then on Shawn, which was mortifying for both of us, and made us less likely to tell our adventure to anyone, lest they think we did it because we liked Melinda. There are just some things an 11-year-old guy would rather not have to live down.

Of course we had made an impression on Bruce and Dee Dee. From that day forward, right up until they were shipped off to reform school or wherever it is they went some time during the next school year, they had it out for us. They began by muttering repeated threats to Shawn on the bus ride to school the next day. Later, at my locker, Bruce got in real close, close enough that I could see his bloodshot eyes, red-rimmed from rubbing baby powder out of them.

"You're dead," he rasped in his raspy, had-too-much-baby-powder-to-eat voice. "Your ass is grass and I'm gonna be the mower," he added, employing a favorite, if unoriginal, catch-phrase of the day.

Eventually, tens of thousands of years from now, my descendents will finally be free of the Smartass Gene that has plagued my ancestral line, and no doubt led to early deaths for so many of us. But on that day and many days since, it was full in force. And since I was in school and therefore safe, I couldn't resist waggling my finger around my nostril area and saying, "Still got some powder there, Bruce. Don't you ever wash?"

Bruce glared and was debating whether or not to start the ass-mowing there and then, but he was interrupted by someone clearing his throat behind us and we both turned to see Mr. Terry, gesturing to Bruce. With a last sullen glare, Bruce left my side and walked into the principal's office. Melinda was just coming out of the office and skirted well around him. Then she saw me, smiled (oh, great!) and hurried into class.

Bruce was back in class by the middle of our first lesson, and shot me and Shawn a venomous look, a fine way to show your gratitude to two kids that kept you from getting suspended, I thought. Shawn did too. "You're welcome," he muttered, then shook his head at me and we went back to our books.

It was just before lunch that Mr. Terry appeared at the classroom door and called me and Shawn out of the room. We followed him silently to his office where he closed the door. He didn't offer us a seat.

"So, boys. Anything you want to tell me?"

Shawn's mom had been a teacher and my friend tended to be excruciatingly honest and forthright with authority figures, so I was afraid he was going to tell Mr. Terry everything. It's not that I was any less respectful, but I also knew we had done some pretty dumb stuff yesterday and I didn't want to end up being the one suspended.

Shawn spoke first and I was thrilled when he said, "Nossir." Mr. Terry looked at me and I shook my head.

"Well," he said, smiling a tight smile. "I hear you two detectives found Melinda's dog for her."

We let our guard down and smiled at that. I nodded.

The principal looked right at me. "Care to tell me where?"

I swallowed hard. "Down at the motor depot." Picking my words carefully, I explained how we realized that Mr. Cecil was driving a new bus and how we thought the dog might still be on the old bus.

Mr. Terry looked back and forth between us. "Well," he said. "The depot was apparently where all the action was yesterday. Mr. Vaughan called to complain about students running around down there, playing around on top of some old buses after the gates were locked. That's trespassing. Bruce and his sister told me they went down there to look for the stuffed toy too, and they had to be chased away because they were pushing on the front gate and agitating the guard dog. I think there was more to it, but all they would tell me was that I should ask you boys what you were up to down there. And speaking of the guard dog, Mr. Vaughan says someone tried to poison that dog. He was very ill last night." At this, Shawn gasped. We found out later that poor Fred, who apparently followed a special diet, got the screaming shits from that nasty cheap, stinky dog food we fed him. Oops. Good thing we didn't give him the second can, I thought.

Mr. Terry was looking increasingly thin-lipped and I began to get the worst feeling that the other shoe was about to drop. In fact, I became absolutely convinced that at any moment he would say, "And how do you explain this?" and produce my book bag--my book bag with my name written on the inside--announcing that it had been retrieved from the top of the fence.

But before the principal could say anything else, Shawn rose to the occasion. "We just went down to the depot to ask about the dog. It was locked so we couldn't get in. But then we saw Jack Lacey there with his tow truck. The bus was on the back and, uh, we looked real quick before he took it away. And we found it." Shawn looked at me nervously. I smiled and nodded. Hey, it was true. Sort of.

"Really?" said Mr. Terry, now smiling. He reached for the phone, and I felt my fillings turn to water in my mouth. He had us. "Let's just call and ask Mr. Lacey about that." He grabbed a phone book from his desk and looked up the number.

I thought Shawn would crack then (later he said the same thing about me). We must have looked pretty sick, standing there as Mr. Terry called the garage. Jack was our friend, but he was also a grown-up, and we knew that when grown-ups interacted with each other, whatever allegiances they had to kids were secondary.

So it was a pretty awful moment, standing there while Jack answered and Mr. Terry, in his jocular ho-ho-I've-got-them-by-the-short-hairs-if-they-had-any tone, explained that he had two boys--sorry, two young detectives--here in his office, and--

Suddenly, we heard a faint buzzing reply from the receiver. Jack had interrupted the principal.

Terry listened, then smiled. "Yes, the dog. It's a prize we--uh-huh. Yes, and they're saying--uh-huh. Uh-huh..." Slowly his face fell. "So, excuse me Mr. Lacey--Jack--they were with you the whole time? But Mr. Vaughan said--uh-huh. No, I'm NOT accusing anyone. No, I know they're good boys, and--well, Jack if you vouch for them. Of course. Of course, I'll let you get back to work. Thanks a bunch," he said glumly and hung up the phone heavily.

I couldn't help but smile. Did I ever mention what a good guy Jack was? I silently vowed never to steal Cokes from his machine again.

"Well," Mr. Terry said finally, harrumphing in that manner that all school administrators do when they know you've done something wrong but they can't quite pin it on you. "Whatever happened yesterday, it sounds as though you boys were acting in the best interests of a fellow classmate and, I suppose, the school."

Mr. Terry held up a finger suddenly. "But! I'm giving you boys fair warning that you are not to play detective during school hours or on school district property. Do you understand?"

I tried not to make a face, but I don't think I did a very good job. It seemed like a completely unfair and arbitrary demand to make. Like he couldn't nail us for doing something wrong, but he was going to impose a quasi-punishment anyway.

Still, what could we do? We nodded and mm-hmmed and he told us to go to lunch.

And that was pretty much that.

A couple days later, as we were leaving school and getting stuff out of our locker, Shawn noticed an envelope stuck in the vent at the top of the locker door. He opened it. There was no note inside. Just a single, slightly rumpled dollar bill.

"Our fee!" Shawn whooped. "Fifty cents for each of us!" Of course, I maintained that we had worked two days on the case--Friday and Monday--so that meant we ought to get another 50 cents apiece, but Shawn pointed out that our sign on the old mail truck said 50 cents a day--not per person--and that therefore we had been paid in full.

Not including the cost of the dog food, I thought. And our ruined book bags. And all the stuff in the Mobile Crime Lab, like my fingerprint kit.

But even I couldn't complain for long, not once we broke the dollar at the grocery in town and each had quarters jangling in our pockets. I still maintain it was the hardest 50 cents I ever earned, but all in all we were pretty pleased with ourselves.

There was just one thing.

We had no idea who paid us.

It wasn't Melinda. I found that out when I thanked her for the money on the bus home and she gave me a mystified look. When I reported this to Shawn, he was all intrigued.

"Maybe it was Mr. Terry. You know, as the principal, he couldn't admit to paying us, so he did it on the sly," he suggested.

Some detectives, huh? I confess, we never figured that last mystery out.

But if you have any ideas, I'm all ears.

Comments:
Hmmm...I am stumped on who might have paid your fees. But, whoever it was, you all earned it. Gripping, fantastic tale.

Woo Hoo! Standing ovation over here! Excellent story! To end it with a mystery too!
Personally - I like your ID pic, cute kid, nothing hideous about it.
Now all I have to do is get some of that software the police use to age missing childrens Pics so you can see what they look like all growd up.......hmmm, maybe my friend ove rat the NCMEC can help out. ;)

You put me on your fav list! I RANK!?! Yabba Dabba freakin do!

I don't know if these stories are real or from your imagination, or a bit of both, but I like them.

I used to feel sad that I was the only kid in my 3rd grade with glasses. I won't go into the nicknames.

But now I can think, well at least nobody held me down and smeared spit on them!

Oh! What a great story!! I bet Jack left the money. Although, how would he know where your locker was?