This weekend, the Brownie turns 4.

Which came as a surprise to nobody, except me. I feel terrible admitting this, because some folks will immediately jump to the conclusion that I am the worst kind of dad, but the truth is, I've been saying she was 4 for the better part of the year.

Note my choice of words: it's not that I forgot her birthday (if you could see my closet and the space under the thing by the place where nobody can get in, you'd know I've been laying in wrappables for her birthday since the beginning of the year).

It's not that I forgot when she was born--precisely eight months after we got home from a little four-day vacation to Bermuda, a vacation from which Her Lovely Self returned bearing a somewhat unexpected souvenir.

The Brownie came a month early, an impatient girl even then. She knew there were brownies to be had and daddies to wrap around her tiny stubby fingers. I have a picture of her at about 6 weeks old, in which she is sporting the most knowing, mischievous, Mona Lisa-like face. In the picture, she is looking at me, and you can almost see the thought bubble containing the words, "Wonder what I can get him to do next..." 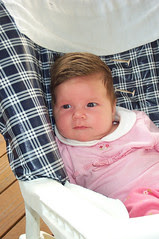 See, even as an infant, she seemed far older than she was, so it's not surprising that now I should regard her as older than she is. She just hasn't behaved like a 3 year-old girl. Like, ever.

I mean, what 3-year-old tells her father that she wouldn't have to cry if he would just follow her directions?

What 3-year-old goes around telling the other dolls that Barbie has a big ass?

What 3-year-old effortlessly manipulates two grown men into building her a secret room (dubbed The Foxhole, although I wanted to call it Brownie Point. Get it? Huh?) with ancillary walk-in attic?

This morning, I overheard this exchange as I was coming downstairs:

Big Brother: So what do you want to do on your birthday?

Brownie: I'm going to be the Boss of Everyone, that's what.

Big Brother: No. Pick something you don't get to do all the time.

Her brother said this without the slightest trace of sarcasm, because he knows what the score is. I suppose that's a sign that things are a little out of hand. But the Boss of Everyone is such a kind and benevolent ruler that we almost don't mind.

And it's hard not to be impressed with such a large amount of will and determination in such a small and button-cute form.

On her first birthday, we made a cake for her that was essentially a giant brownie. It was just large enough for all of us to have a piece of it. We sat her in the high chair, presented the candle-lit cake on a pink plastic plate, and sang the requisite song. We helped her puff out the candles, then she proceeded to reach in with both hands. Her Lovely Self told her not to touch the cake, to wait til Daddy had removed the candles and Mommy had brought over plates for everyone.

We should have moved the cake away from her. But our backs were turned for only seven seconds, only long enough to step into the kitchen (me to throw the snuffed candles out, Her Lovely Self to get plates). Then we heard the simultaneous crash of a cake plate and cry of an aggrieved brother.

We couldn't believe it, but the evidence was all over her (although she only ate HALF the cake, not the whole thing, as her hysterical brother had insisted. Still, it was quite the accomplishment). And there was no mistaking that look of pride on her face. I should have scolded, or done something parental. Instead, I snapped a picture. 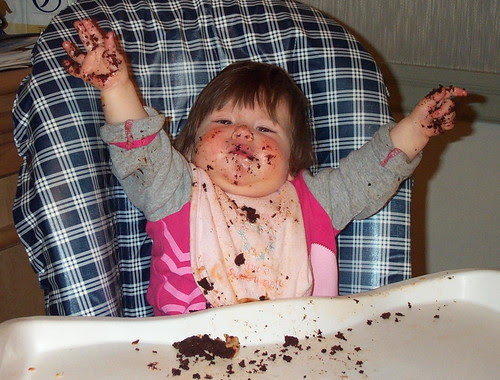 Is it any wonder I call her The Brownie?

Comments:
Happy Birthday to the Brownie!

Great post - Daddy's adoration and love oozes from it.

Oh my lord, that picture (and this post) is so adorable it brings a tear to my eye!

What this child does to Chocolate Cake, I do to Watermelon.

Should I be troubled that she looks like I do typically when I finish a meal?