In Which We See How Deep the Foxhole Goes...

Well, it's not quite as my father and I had envisioned it, but by God, The Foxhole is done (except for a few minor touch-ups and things only Her Lovely Self would notice).

First, understand that The Foxhole is a piece of magical real estate. As such, one does not simply open a door and walk there. One must tread on secret paths. One must have special help to get there: magic words, talismans, strange artifacts. Things like that.

In this specific case, we require a Magic Doorknob. 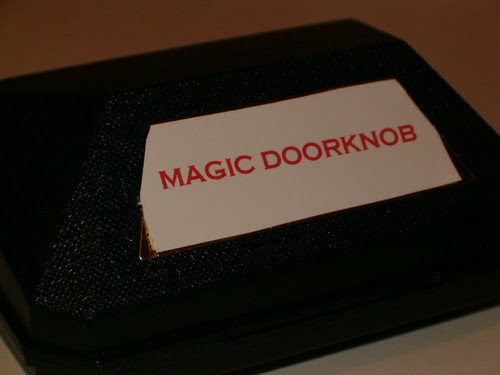 When The Brownie first insisted on a Magic Doorknob for the secret door in her closet, I was a bit flummoxed. What qualifies as a Magic Doorknob to a litle girl? Her Lovely Self, who was forced to live a childhood marred by pragmatism and practicality, was no help on this front. One of my very favorite bloggers suggested a glass doorknob, and even sent a helpful link to a place that supplies same. I got a lovely, large, multi-colored cut-glass doorknob, which was indeed magical. Unfortunately, in a trial mounting on the secret door, someone opened that door and drove the glass doorknob straight through the closet wall. Oops. Half a can of spackle later, it was determined I needed to go with a much smaller knob (however, the glass doorknob will end up on the door to The Brownie's bedroom, so all is not lost).

Magic Doorknob 2.0 began life as a child-safety product. But with a little pink paint, a fox sticker and an old Timex box (oh, plus magic), well, you get this: 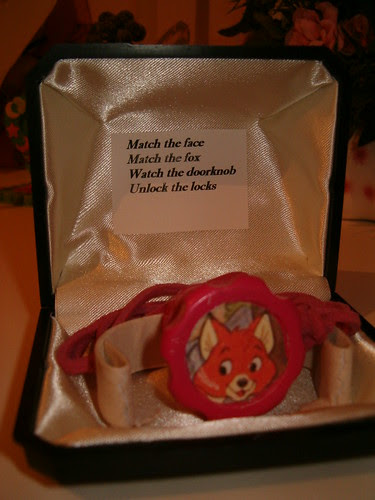 I wound some pink string around it and thus the Magic Doorknob could also function as a fashion accessory. When we got out of the bath tonight and found this gift waiting with our jammies, it was VERY well received. We didn't even stop to dry our hair: 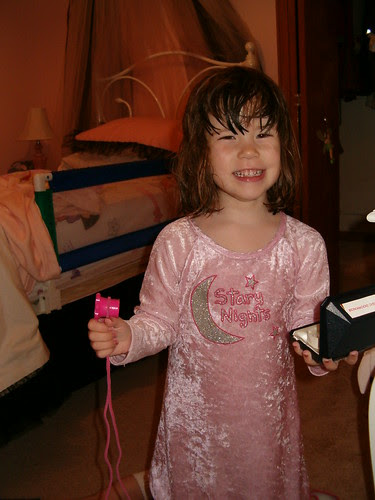 Except, how does it work?

The Brownie regarded the secret door. She pulled the knob, but the door seemed stuck fast. How to open it? The sticker on the upper right corner of the door provided a clue: 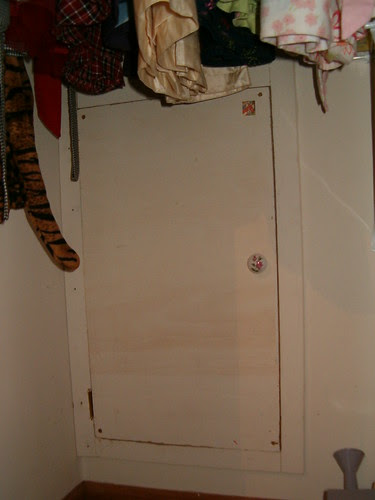 Realizing the image matched the picture on the Magic Doorknob, The Brownie put two and two together and voila (or perhaps, Open, Sesame?) 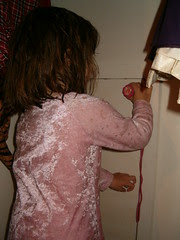 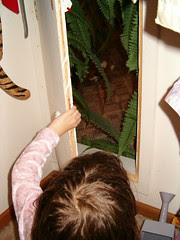 The ferns startled her. Imagine if you were expecting a white room with ugly brown carpet and saw this: 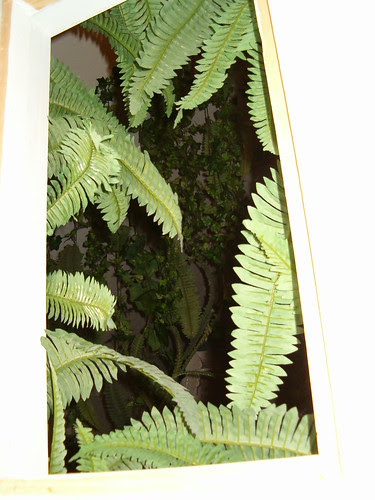 I heard her gasp, then she turned and flashed me a look of pure delight that made me think this might be one of those moments she'll carry with her forever (one can only hope). And then she slowly crept in to The Foxhole... 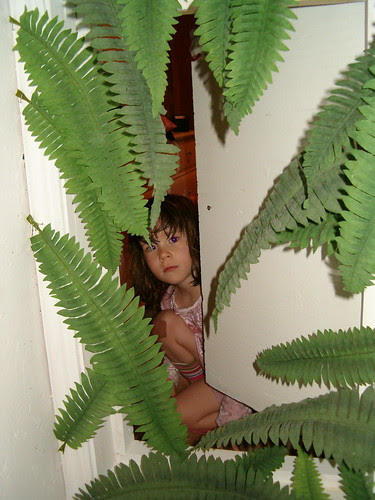 Anyone still want a Before and After picture? Here ya go:

First there was this... 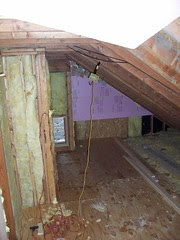 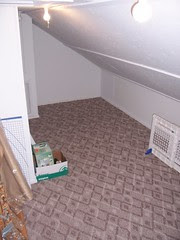 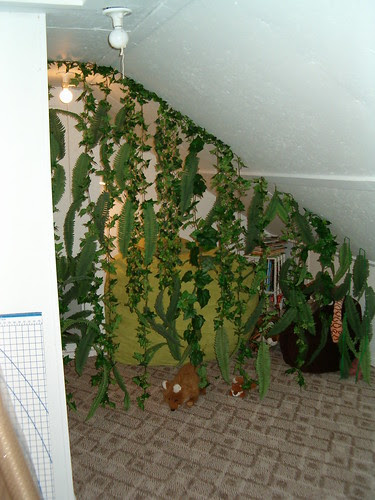 Originally, Dad and I had planned to wall off the small section, but then my mom convinced us she could sew a fun curtain that would have cloth trees and leaves sewn onto it. Except she left before she could get to it. I can darn socks, but that's about the outer envelope of my sewing skills, so I raided this giant box of plastic plants and vines that someone had left in the prop room at the photo studio of one of our freelance photographers. He was happy to get rid of the stuff. I never thought I'd be welcoming faux greenery into the house (and I can tell the dog was a little thrown by them too) but they did a nice job of defining the space and actually making it feel like a hidden little cove in a forest. 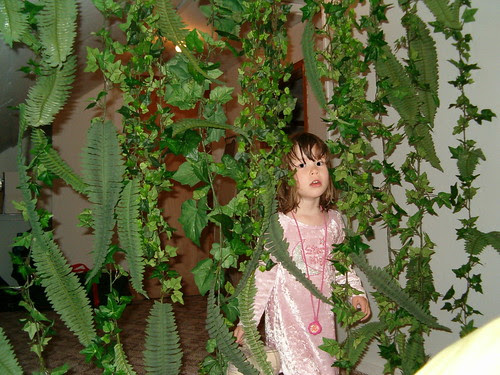 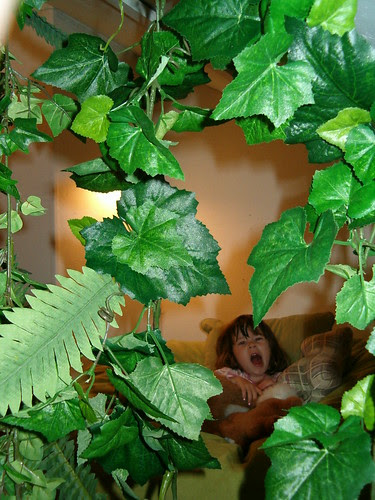 Truthfully, if I stare at it long enough, the overall effect seems tremendously tacky. But then, it's not for me. And the person it IS for seems to like it just fine, judging by the number of times she (and her brother and the dog) ran through it. 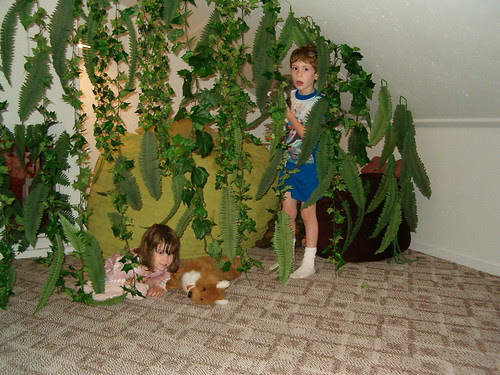 It's hard to give you the full view, but basically, The Foxhole is about 4 X 10, just large enough for a couple of stacked milk crates full of books, a short box of comics, and The World's Largest Beanbag. 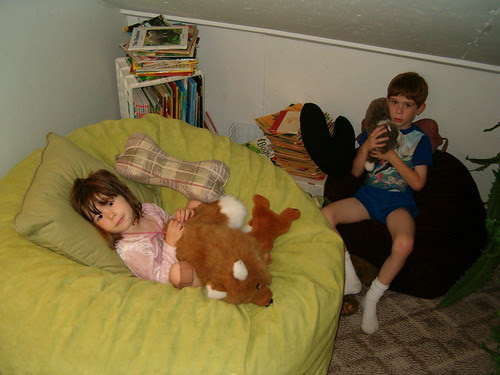 Which, despite my dad's prediction, was less like moving a dead gorilla or baling snot and more like trying to wrestle a monstrous marshmallow, especially when I had to haul the thing out of its original hot-pink slipcover and stuff it into a new one that had a more appropriate woodland hue. The bag is over 5 feet across and weighs close to 100 pounds. It's a minor miracle that I got it up two flights of stairs with only one mishap (it freaked the dog out and he tried to jump over it. In the middle of the stairwell. Hilarity ensued).

But even if I'd had to carry that fricking beanbag on my back up a hill wearing heavy woolen clothes and flip-flops, and being chased by a pack of ravening pit bulls, it would have been worth it. Tonight, when I sat down in the beanbag with her and read The Little Fur Family, she snuggled in close under my neck, like she used to when she was a baby, and heaved a big contented sigh and whispered, "Daddy, this is the best thing that happened to me, ever. I love you bigger than my beanbag."

We stayed in The Foxhole til WAY past her bedtime, but on the way back home to her room, she gave me a look that will become one of those moments I'll carry with me forever. 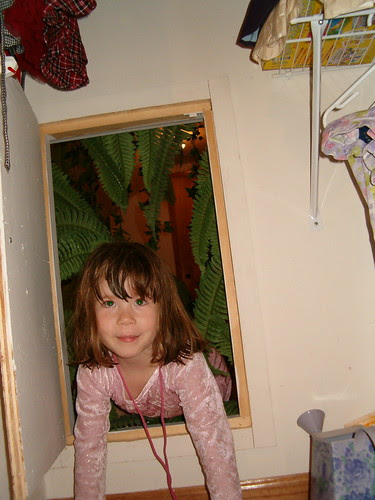 People have been asking me all week what I want for my birthday. If they could see this picture, they'd understand that no gift could top what I already have.

Yours,
From Somewhere In The Foxhole

Comments:
The 21st was my birthday, and I have to say that I absolutely loved seeing the final results of the foxhole. Thank you for sharing that with us.

Second - Wow! Great job on creating such a magical place for the Brownie. You can see the wonder in her eyes, I predict many an imagined adventure in the foxhole.

Wouldn't it be cool if some tiny, sparkling fairys occasionally appeared in the hanging greenery? After all, what's a foxhole without fairy dust? Hint, hint. Wink, wink.

The whole thing reminds me of The Lion, The Witch and The Wardrobe! Outstanding job - you're a great Dad.

I'm fairly certain you have insured a happy childhood with this.

Wow you are the bestest daddy.

But now the boy needs his share, you know...

A geckie, at least. Maybe even a pet snake, huh?

We need more Dads like you. Thank you for sharing The Brownie’s Foxhole story. Once again, you have made my day.

This is completely awesome! I sooooo wish my daddy would have built me one of these as a little girl - Lord knows I had big plans for the parts of our house that looked like your "before" picture. The back of my closet (there was a door leading to a space much like this behind the rack of clothes) was as close as I got - and it was filled with cockroaches and smelly old clothes. Oh well, I guess that's why we are blessed with imagination.

Help! I am lost. I was searching for pet portrait and somehow ended up here. How that happened I don't know, however I do like your Blog a lot. Would you mind if I add your Blog to my favorites page so others can visit?