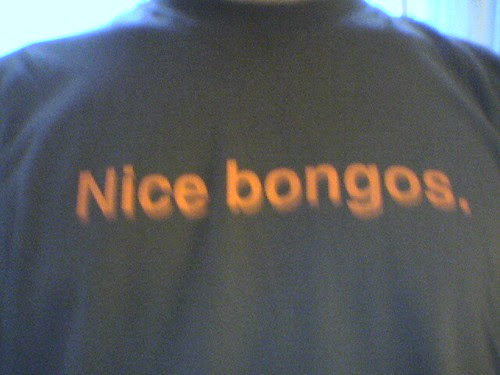 Chicago is right where I left it. Cities like New York tend to be slates that wipe themselves clean every decade or so. Places you remember taking dates, certain holes-in-the-wall where they wouldn't check your ID, a hundred little out of the way hangouts--they vanish at intervals measured in years and when you find them gone, you feel old and stupid and left behind.

So far, that hasn't happened in Chicago, but maybe I haven't lived away long enough. Or maybe I was just lucky enough to choose places gifted with a certain longevity. To be sure, the Great Beer Palace is gone, Delisi's only serves lunch on weekends now, but all my favorite haunts are pretty much intact.

I arrived in Midway and hooked up with JC, who was the only man sitting at the bar. It was barely 10 in the morning. "Hey, it's Happy Hour in Paris," he said, finishing his drink.

The great surprise of the morning was discovering C-Dog--the one responsible for securing transportation--had not brought his crappy, rusted-out van. I had harbored no small concern about traveling across the country in this vehicle.

So you can imagine my relief when he showed up in his wife's minivan. Did I say relief? Try astonishment. We could not have been more surprised and impressed if he had pulled up in a rock band's tour bus.

"How did you ever get her to part with this?" I asked, peering into the cabin. A built-in DVD player, holy shit. And my God, there were actual seats in the back. Drink holders too. Take kids out of the equation, and minivans are like lounges on wheels. I can't imagine the events that would have to conspire to cause Her Lovely Self to relinquish her van to me for a week. It would almost certainly have to involve a time paradox or some serious pharmaceuticals. Possibly both.

That was the good news. The bad news was, since I was designated to drive the Chicago shift, I wouldn't get to enjoy any of the amenities for a while. People tell you Chicago is easy to navigate because it's laid out in such a sensible grid (perhaps sensible is too strong a word, but you take my meaning). It was the first big city I learned to drive in, to truly make my way in, and I was glad to bring that old, hard-earned skill back to life. So we drove up and down Lake Shore, down Michigan Avenue, getting all the touristy stuff out of our system.

And then we headed to my old neighborhood, where we had drippy Italian beef sandwiches in the company of three large, rusting, metal sculptures of cows. From there, we bar-hopped our way across the city til we found ourselves at the Museum of Science and Industry, where we were scheduled to meet The Kid, who was wrapping up a broadcast story on their new exhibit.

What none of you realize is that calling him The Kid is a joke. Though the youngest of us, he is such an old friggin' man. It took a lot of cajoling just to get him to join us. There was always some impediment. He didn't think he could get a flight. His bags would be too heavy to lug ("Bags?" yelled C-Dog, when he heard this. "I'm not even packing a change of underwear!") He didn't want to drive because he might be uncomfortable (goddamn, I'M the one with a back so bad he had to have a needle stuck in it less than a week ago). He didn't want to stay in any fleabag motels because he was afraid of the cleanliness of the room and, to be specific, the bedding. Oh, the list went on..

But then he was in the van with us and we slipped into that familiar groove of easy banter. At the job where we all worked together, someone once told me they liked to hang out on our hall just to listen to us bitch and rant and tell jokes at one another's expense. I thought of that now as we rolled back onto Lake Shore. My stomach actually hurts from laughing so much. Anyone who thinks I'm funny would revise their opinion downward if they were along for the ride.

And that's exactly what I came here for. Not the drippy Italian beef. Not the chance to see one of my favorite cities again. Not to drink beer and pass gas and hot air with my buddies far from the skeptical spousal eye (well, not only that). I came along for the ride. I came to laugh.

More from my next stop...

Yours,
From Somewhere on the Road