Occasionally, readers wonder aloud at the unlikelihood of so many amusing and dumb things happening to one person in a given week.

What you don't understand is, it's not a question of chance or fate. And contrary to popular belief, I am not accident-prone (no, really!). It's all just a function of the dumb-ass things I rope myself--or allow myself to be roped--into.

For example: Let's say you're spending a productive afternoon in your basement, sorting crap, when your son takes an interest in the fencing equipment you've had since college. Once he finds out what it all is, he seizes up his toy light saber and begs you to have a mock duel with him.

What you fail to consider--either of you--is that you have decided to do this in the middle of an area of the basement that is strewn with boxes, both the low-to-the-ground variety and the stacked-rather-precariously variety. Which means that even under normal circumstances, the odds are fairly high--if you're me--that you might accidentally step in the former and reach out to steady yourself on a tottering pile of the latter. With predictable results.

Furthermore, you have, by your own choice, donned a fencing mask, which reduces your visual acuity to the all-bets-are-off range.

Also, you are, not to put too fine a point on it, a 37-year-old man using the tactical equivalent of a radio antenna to defend yourself against a 6-year-old boy with a light saber.

Finally, because that boy is now going crazy with the movie feature on the old digital camera you've been letting him play with, everything that happens is captured on video.

Yeah, I know. It seems like a pretty unlikely confluence of events.

But for me, it's just a brief moment in an all-too-typical weekend afternoon.

(Oh hell, go ahead already! Click on the picture. It's about 7MB.) 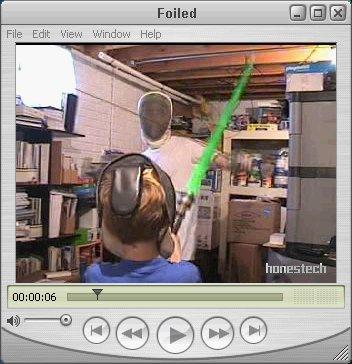 Dear God, please please don't let me be the next Star Wars Kid.


Yours,
From Somewhere on the Masthead

Comments:
Next time, may the Force be with you. ;)

After last weekend and now this I'm beginning to think your the poster child for arrested development. It's all worth it when you hear Thomas laugh. Star Wars Rules!

Let me help. I'll take a webcam off your hands.

Oh, but I'll send you a 1962 Batman and Robin wall calendar since we seem to trade evenly.

I figured out how to make the crash part loop. Im crying over here.

Watching you fall on your ass over and over is the best birthday present I could hve asked for.

Thank Thomas for me!

OMG, that was the best. Thank you for making my morning better!!

YES! MM Vblogging!!!! That was the balls. MM in action. Puts your posts in pefect perspective.

Best thing you ever did was give that camera to Thomas.

I think I see an America's Funniest Home Videos entry in here...hope you're not too bruised and battered from your weekend's activities, and if he hasn't done so already you should have Thomas draw a picture of the moment of impact with boxes raining down from the heavens!

That was way to funny...


Maybe you should go outside next time...

I don't know what I like better - the clip, or the fact that Sharfa called it "The Balls" (one of the best sayings of all time). I think you had him until the boxes involved themselves.

You're very tech-savvy this week - first with the audioblog, and now with the videoblog - impressive!

Maybe Thomas has another (other than art) talent...I see an Olympic fencer in the making. Or maybe an actor (being paid well, of course) in period pieces?

way, way too funny and seriously time to start getting rid of those boxes -- get that webcam to the bunny

My favorite part is Thomas' laugh. Too funny.

That is the most beautiful thing I have ever seen in the blogosphere.

And that was before I'd seen the thing fall on you.

OMG that's awesome. I seem to remember that happening to me at school once. Luckily nobody got ahold of my camera for that. XP

Moreplease!! I'd like to see HLS Baaah'ing at Blaze or something. ^_~

keep it up, Jedi Master MM.

That was a thing of beauty.

Suddenly, I feel better about my Piles o' Things. It's good to know that I am not alone in the Fellowship of the 30-something Klutzes. I broke my foot tripping over a hiking boot, so I fear I win the Major League Klutz award, but your fall had everything - a little Keystone Kops, a little Star Wars, a delighted child, and it just... kept... happening...

Hey MM, some of your writing is hilarious, but I think that video is the funniest thing I've seen on your blog so far...especially when you were trying to get up and pulled more boxes down on you. Hey, at least you didn't break any bones or require a trip to the emergency room!

That's great. I think the best part is Art Lad laughing his ass off at you.

Someone might need to get a hold of that and put the Imperial March as the soundtrack.

Too bad Darth Vader didn't think of that earlier. Just fall over into some boxes and get Luke laugh himself silly!

That's great stuff. I think you should reward the boy and get him a REAL lightsaber. Now THAT would be bad ass.

"I have something here for you. Your father wanted you to have this when you were old enough, but your uncle wouldn't allow it. He feared you might follow old Obi-Wan on some damned-fool idealistic crusade like your father did."

Classic. Now if only there were videp of The Bike Incident...

PS, someone found my blog on google by searching "magazineman blog." Guess that's better than searching... well, other phrases.

Believe me, if i had MEANT to do that, I would have carefully placed something soft on the concrete floor to prevent the stupendous black-and-blue mark currently adorning my right buttock.

I needed a laugh today :D

Actually I think Thomas is the one who planned it all in advance! :) He's a sly one.

Ah, that last post was me. Don't know what happened there.

having it all on video.

;( I can't seem to share in the joy of this video. Keep getting some weird format error. Anyone wanna help an MM reader out?