In Which All Our Troubles Are Christmased Away...


So the blather of the past week or so wasn't even intended to be a Christmas story, just a really long digression from a brief anecdote about getting our own Christmas tree. 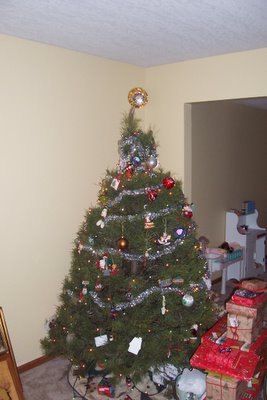 And all I can find myself thinking is Where the hell is that bare spot? The one that was just a foot from the top that you couldn't miss?

It's so strange to be a grown-up and to have to wonder about these things. Both Her Lovely Self and I have marveled several times this week over the disappearance of that bare spot (and I know you think I was exaggerating, but it was HUGE, on this even my wife will agree).

Whereas, when you're a child the answer is simple.

The other night as I hung a little tinsel on the tree and listened to a certain playlist on my computer (titled "Every Fucking Xmas Song Ever Recorded") and did some nogging, eggwise, and in general tried to stuff myself into a Normal Rockwell print as totally as possible, I felt a little tug on my pant-leg.

There was the Brownie, wearing her new red nightgown that my mom made for her. She had come down to say good night to the tree.

"Dad," she whispered (ever since it was fully decorated and lit, she always whispers around the tree). I bent low. "The big hole in the tree is gone," she said.

"I know," I replied. "Mommy and I were wondering where it went."

She looked at me for a moment. "It got Christmased away," she said seriously.

"Really?" I asked. She nodded and turned her attention to her friend the tree. But I wanted more.

"Honey," I said. "Who specifically Christmased it away?"

She turned to regard me again with a look that she will probably use decades from now, when I'm wizened and drooling and wondering if she's seen my letter from Carlton Fisk anywhere.

Then she just gave me this shrug that was so long and languorous and freighted with meaning that it belonged in one of those Peter Mayle books about Provence, it was that kind of shrug.

"Santa. An elf. A sugar-plump fairy. Baby Jesus. Somebody like that. They fixed it," she said.

Well, at least my daughter has managed to link her Lord and Savior with some aspect, however tenuous, of the mystery and unseen wonder of Christmas.

Which is more than I can say for her brother. We gave the kids a Playmobil Nativity set, figuring that the best way to begin their indoctrination into the more sacred aspects of the holiday was to give them a specific job: they get to set up the manger scene.

The Brownie takes this duty very seriously. But Thomas simply sees the set and its holy populace as more action figures or, worse yet, stars in his latest video.

As devotees of Art Lad may be aware, my son received a little kid's video camera for his birthday and has made several short films, all of which he wants to put on his blog. For example, there was his documentary on herbivorous dinosaurs, who apparently used to celebrate a Thanksgivingesque holiday known as Nibbling Day (alas, at the very end of this quiet, pastoral video, we discover that the carnivores of the era had their own version of Nibbling Day too). It's a keeper, but in serious need of editing before we could post it.

Then, the other day, he assured me had the perfect video to put up on the blog, a Christmas video. So I gave him permission to use the Playmobil Nativity Set. I even granted him a little creative license, so that he could have a slightly larger crowd for the manger scene.

Thus, when the camera would roll and we would fade in to Playmobil Virgin Mary standing at the side of Playmobil Joseph, both adoring their tiny plastic Jesus, in the background you would see a Throng, a downtright Multitude: not just assorted Wise Men and shepherds, but also a delegation from the Justice League, one of the Teenage Mutant Ninja Turtles, and Buzz Lightyear. Among the animals in the barn, there are of course Playmobil cows, sheep, dogs, and cats, but it appears that the animal couples from the Brownie's Noah's Ark set have migrated over from the Old Testament, along with a small herd of My Pretty Ponies.

Laugh if you must, but Thomas was so solemn as he went about setting up the scene (even tilting lampshades nearby for proper lighting), I just couldn't watch. I crept out of sight to the hallway, where I bumped into Her Lovely Self, who was also hiding. We traded a look, the look that parents give each other when they've just stumbled into one of those Moments You'll Cherish Forever.

Quiet as mice, we stood in the hallway, listening, as Thomas told his sister to step back. Thomas doesn't yell "Action!" like most directors. He simply announces when the recording light winks on in his viewfinder, shouting something very similar to what I used to say when I had my first camcorder.

Silence. Then we heard my son again, in his role as The Narrator.

"It was the holiest night ever. It was the night Baby Jesus was born. All the animals came to smell him and the Justice League and some wise men from some place came too."

There was silence for a moment--presumably he was setting up another shot--then we heard Thomas narrating again.

"All is calm. All is bright. Like in the song."

At this, Her Lovely Self put her hand to her mouth and the tears welled up. I put my arm around her. Our little boy--

Then we heard the scuffling sound of plastic feet moving rapidly and the Narrator's voice quickened.

And Her Lovely Self ran, while I dropped to my knees, as one might in prayer, sobbing and crying. And laughing my sacrilegious ass off.

So, not quite ready for a holiday movie marathon of my son's videos.

But that's okay. We're perfectly content to spend our evenings staring at the Brownie's friend, the tree.

In all its Christmased glory. 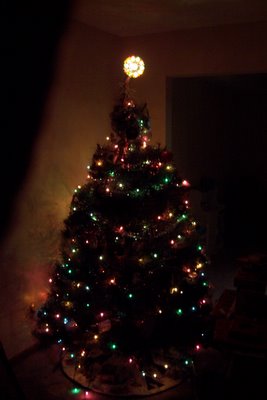 Best wishes, MM. I am wondering if you could help me Christmas away this annoying cat at the office...just wondering...

*trying to stifle my laughing so i don't wake the house*
THAT WAS AWESOME.
i cannot wait until i have kids so i can witness how awesomely hilarious kids can be.
merry christmas. =)

I'm a Christmas-loving Jew, and your last few entries have been vastly entertaining. Helped inspire me to write my own Christmas post yesterday. Happy Holidays to you!

Merry Christmas to the MM clan! Your post is very touching and funny as hell - "Run, Baby Jesus, RUN!!!" made my stomach hurt from laughing so hard. It's great to capture all these moments for years to come. These entries will be the contemporary equivalent to the cassette tapes of your family you found recently.

I just read your last year's Christmas-time post for the first time - very nice, too.

Holy Hannah, that was funny! Got myself into a righteous coughing fit over that one. Thanks for the laugh, and I absolutely vote that Mr. Lad be supported in the publishing of his version of "A Visit From St. Velociraptor"... A Merry Christmas to Ms. Brownie, Mr. Lad, Mrs. Her Lovely Self, and Mr. Man. May all your purest Christmas wishes come true.

Oh you shouldn't make me laugh so hard when my stomach is so full!

I don't think I'm ever going to view that manger scene like I used to.

How. Freakin. Funny! I read this one out loud to The Hubby on the day after Christmas, and we both had a good laugh. I hope your Christmas was wonderful, MM! :)

Gotta love the kids and all their interpretations of life. I would have been with HLS, running for a closed door to lmao.

You can title it WWJD: RUN!

You'd better bronze that sucker and stash it someplace safe in the basement (where you will remember & be able to find it again of course). Better still, contruct a compilation DVD and save it to give to his bride-to-be when he's all growd up.

Hey MM. That helped bring a smile to my face this Christmas. I really needed it this year.

Your daughter knows something you don't. Just don't bug her too much about why she knows. If she figures that out, she may not know it anymore.

Just when you think one thing is about to happen...

My youngest son got sick in the wee wee hours of Christmas Eve morning. I still had many things to do, but somehow they too were Christmased away. No one even noticed the unfinished tasks were unfinished. I believe it must have been one of the Brownie's sugar-plump fairies. My son felt much better for Christmas day, still a little off, but much better. I think maybe Baby Jesus handled that one...

I love kids. They make everything more fun. My two-year old lied to Santa this year, saying she was five in order to go first. (He knew better.)
How'd Her Lovely Self like the greenhouse?

I so want to babysit your kids just for one afternoon. They're a wealth of entertainment.

This will go down as one of my all time favorite Christmas sayings, I think.

Wow. I've been lurking here for awhile, and this entry just made me laugh so hard it brought me to tears and I keep experiencing aftershocks of laughter. Your son is awesome. (Don't know if anyone will see this since I'm posting a year late, but this post made my day and I just had to comment.)