Wow am I tired. Everyone at work has been taking turns getting the stomach flu, and what a lot of fun that's been. So far it's been a purely spectatorial activity for me (yay flu shot!) but it's meant I've had to move a lot of other people's copy.

And fast. Because, unless plans go horribly awry, I'm taking off the week between Christmas and New Year's, and all my department's copy has to be shipped by then. My God, that's 11 whole days I'll be out of the office. Unheard of. My previous record is about five days, so to have 11, well, that's positively pornographic, as time off goes.

Speaking of time, one thing I sort of hate about the holidays is how quickly the calendar fills up and how just as quickly dates and times empty themselves from my head. I know quite a few magazine editors who are always dashing off to this press party, or that corporate gala and they live for it. I get the invites, but I rarely go. Yes, there's top-shelf booze and nice gift bags at the door, but I'll gladly sacrifice all of that to avoid the never-ending networking that goes on at these things. No doubt I've hobbled my career a thousand times over by not getting into the spirit of it all, but most of the time I just can't summon the will to endure it. Or if I do summon the will, my mind blocks it out completely.

As in the case of last night, when I came home, changed into the absolute grubbiest clothes I had (in order to work on a certain project hidden away downstairs), and only then was reminded by Her Lovely Self that I was promised forth at a holiday party, one that my boss would be attending. One that I assured my boss I would most definitely attend. One that I had completely forgotten about.

One that was starting in 45 minutes.

And naturally, ALL of my dress shirts were either at the dry cleaner, or lying in wrinkled heaps around the house.

What's more, we're at Day 6 on the beard growth scale. It used to take a few weeks for me to look this scruffy, but now, just one week (give or take) is all I need to look bad enough that, when I'm out walking, old ladies scurry across streets to avoid me and police cars that patrol the neighborhood actually slow down to check me out (although, really, how many burglars case a neighborhood while walking their dog?).

Nevertheless, despite what she had to work with, Her Lovely Self pulled something together, and I was transformed thus: 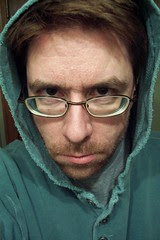 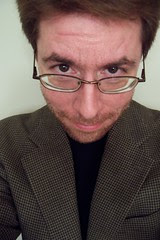 
(Methinks this weekend it will be time to start sculpting it into the goatee--excuse me, Van Dyke--style I prefer.)

And so to the party, which was nice enough as these things go. But alas, even though I looked like the guy on the right, I felt like the guy on the left: haunted, bedraggled, a little overworked and a little obsessed with a certain project. Which, after putting in the requisite couple of hours at the party, I was able to absent myself in order to go home and work on it.

Got home from the party, and HLS was already zonked out in bed, so I was able to transform once again, this time from Amusing-But-Not-Very-Handy Husband into my alter ego, Handier-Than-You-Think Man. And so I changed back in to my grubbies and got some work done on her Christmas present.

Which brings us to yet another pair of "Before" and "After" shots.

Or perhaps these should be titled "Perception" and "Reality": 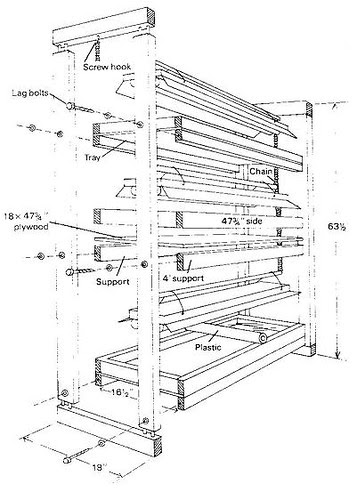 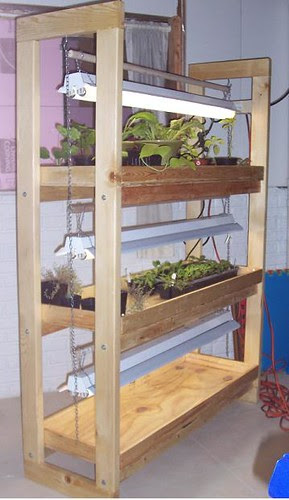 Like the plants? I put them in for effect. Still have some minor things to adjust and I need to figure out a more effective way of running power to the lights, but by gorry, I think I pulled this one off.

Where the hell am I going to hide this honking big thing til Christmas?

Even my Basement of Crap isn't sufficiently stocked to completely obscure this thing. Must ponder this.

But later, after I've had just a few hours of sleep and feel more like myself.

Comments:
Where the hell am I going to hide this honking big thing til Christmas?
Now, see, those of us who are true savers of crap would not have been so foolish in giving so much of it away. Good deeds not withstanding. Had you hung on to all that "useless" crap your next handier-than-you-think project could be building the fortress of flotsam & jetsam, thus hiding the soon to be "Oh My God" tournement winning prize. Perhaps a big schmata & some left over crap would suffice...Good luck with that.

It's fantastic! HLS will love it. My, how handy you are! You may be redeeming yourself.

You certainly pulled it off. Good job!
She's going to love it.

You must have a tarp laying around that you can cover it up with?

Sheesh - only 6 days of growth! It looks more like 48 days of being stranded on an island without a razor.

Your special project turned out very nicely there, MM! I'm sure HLS will be very pleased.

Bravo on the greenhouse. Color me impressed. (not surprised, but impressed!) :)

First of all - the beard is looking very very sexy. Second - the flu shot didn't save me! Keep healthy!! ;) Third - WOW! She is going to fall over and die when she sees what a great job you did!!!

The Van Dyke is coming along nicely, I think!

The Secret Project looks great! As for hiding it...maybe just wrap it ...take a roll of christmas paper and do two or 3 layers starting at the top, thusly covering it...then go get a blue tarp, or some old blankets...and violia! just enough to cover the tall part, then hide the bottom with boxes of stuff....in a dark corner...that HLS NEVER would venture into....good luck!

Welcome to the club

I hope you know this opens a big door for HLS. But seriously, it turned out great.

I am without a doubt confident you will find a secret hidey-hole to put your master piece. I want to see the picture. Well done!

HLS is going to think her hubby and Bob Villa swapped bodies, especially if that beard keeps growing at rapid speed.

Jim, Bravo on the link!

MM, consider the Imperial instead of the Van Dyke. Oh, sorry, we're in America, I meant the Van *bleep*!

Also, can't you just forbid HLS from entering the basement until Christmas? That's what I did with the kids and they were cool about it. It adds to the excitement of their Channukah morning, when they will run downstairs, and see the Channukah tree all lit up with lots of presents underneath. Ok, that was just for those without coffee in their systems. Seriously, my kids were cool with me "forbidding" them from coming into our room until Channukah presents had been, er, presented. Of course now my wife and I are virtually swimming in presents in our bedroom, but hey, life is to be lived.

I must say, that is impressive. I'm a bit surprised, too. You did it all by yourself! You should be so proud. :)

Oh, and whatever happened to the possum in the garage post? I was going to send the link to my mom--she would get a kick out of the story, seeing as how my dad just had a similar experience with a raccoon.

You'll find that tale at

I was going to put in my best-of links eventually, but haven't had time. Enjoy!

God! Would you knock it off with the big-ass pictures of your face in every single entry? I had to look at it for 18 some years and I now I gotta look at it every fucking day?! Enough. You're growing a beard. I get it.

How many more pictures do you have to run? Who do you think you are, Andy Gibb, that women are downloading poster-size blow-ups and putting them on theere walls?

Keep this up and you might as well change the title of the blog to Somewhere on my Head.

Otherwise, good job on the greenhouse thing. But how you gonna sand it without taking it outside, Einstein?

No disrespect to your brother, and who would deign to cast a shadow on the man who shot himself in the leg, with his own gun?... But...

My wife looked at your latest pic, the before and after, and immediately asked me to leave the bedroom so that she could, ahem, read in peace.

Hey, I think I may have just creeped myself out with my own keyboard.

Wire the extension cord to a plug and back to the outlet. Plug the gro lights into the outlet that is nailed to the plant stand.

Unplug when not in use, etc.

But, to coin a phrase of our old boss, CC: You knew that already.

The beard and the present look good!

Good luck with the hiding spot.

I've been growing a beard myself. I never mean to grow the damn things it just happens out of laziness. Maybe I'll post a picture here soon.

We should grow them mountain style and go see Brokeback Mountain together.

Just kidding. I'm not gay, but in reference to your blog:

Alright, that's enough homosexuality for one day, not that there is anything wrong with that.

I'm waiting for the retort to the brother's comments... because his were damn funny, and I am sure there is something witty in response.

Okay, first of all, don't wear the hoodie. You look like the Unibomber.

Since this was designed for lifeforms of the plant variety, I assume somewhere there's going to be water involved. You may want to run seal-tite (or liquid tite, whatever you want to call it) to a water tight box mounted low down and then come out with a six foot piece of 12/2 SO cord to a fifteen amp cord cap. And, actually, while I'm thinking about it, you should probably consider putting a GFCI cord cap on there, for safety's sake.

If water's not an issue, I'd use 12/2 BX, series your lights to a single whip, then go to a watertight 4S box (just because I think they look better) and then out with an SO cord whip and forego the GFCI, just make sure you ground everything correctly.

I'm really looking forward to hearing about HLS's Christmas Day! She is going to be so thrilled.

Hey, if Magazine Man has indeed been writing nonfiction, then he best take extra care, what with the proximity of The Device's water/electricity proximity. After the ladder story, well, I'm just afraid for his life!

I guess you are pretty secure in the knowledge that HLS does not care to read your blog? Or ArtLad's for that matter? And I'm sorry, but if my dh told me not to go somewhere in the house the week before Christmas, I'm pretty sure the curiosity would kill me. ;-)