Remember what I said a few posts ago about Shane being an inexhaustible font of creativity, especially when it comes to finding creative ways to get his readers involved? Well, he's done it again.

I'm talking, of course, about the Mystery Hotel.

Like Shane, I love stuff like this. Old photos, old newspapers. One of the qualities I enjoyed most about Jack Finney (who most people remember as the guy who wrote Invasion of the Body Snatchers, but who also wrote the beloved time-travel novel Time and Again) was his ability to telegraph his enthusiasm, especially about news and events of the 19th and early 20th century. This was a man who had a personal desire to visit a time before his birth, to get at the mysteries implied in an old letter, in a newspaper story that was never followed up, in the odd expression of a man, captured forever in sepia tones. I think it's the same for Shane. I know it's the same for me.

When I first saw the photo that started all this (it's included below), I went into Boy Detective mode and tried to find the real hotel, but vast as the Web is, you quickly learn its limitations when it comes to stuff like this. This is the time when you need the eye and experience of the old lady behind the reference desk at the library, or the key to the restricted stacks where they keep the brittle, leatherbound annual business directories dating to a time when men who fought in the Civil War still walked the earth.

So I went with the short story option, which was Mr. Wheaton's idea. It's not clear to me whether it was Shane or Wil who put a sub-300-word limit on the story, but which ever of you it was, I just wanted to say: THANKS FOR MAKING MY LIFE A LIVING HELL!!

I don't know if you ever noticed or not, but my blog entries are not exactly short-form. It seems folks love to hate me for my cliffhangers, but the alternative is to give you giant 5,000 (or sometimes 11,000) words in one big glop. In short, I have a hard time writing short. But I've learned to live with this handicap and even occasionally overcome it. One of my English professors once wrote on a paper of mine: "They say brevity is the soul of wit. But every rule has its exception, and in this case, that's you. Good job." Of course he also wrote "PS: If you ever give me 12 pages on a 5-page assignment again, I'll take a grade point off for each extra page."

And that's when I started learning to be an editor. The writer in me is a long distance runner. The editor in me is an axe murderer. And I've gotten good at it. Just last month I edited a 4,000 word story to 389 words. Not unusual. Just part of the job. Of course, it wasn't MY 4,000 words I was editing...

And now here I was faced with a below-300-word limit. My God, I can't clear my throat in 300 words! But I tried to write a story anyway. Believe me, in the past 36 hours I tried.

Then I wrote a hard-boiled detective story, and that was even longer: 2,467 words! I needed a little less Raymond Chandler and a little more Raymond Carver.

And then this morning, in the time it took me to drink a cup of coffee, these 299 words came tumbling out. 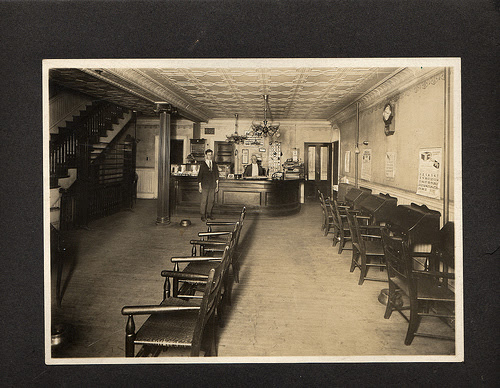 "Gentlemen, this is for page one! Can't you enliven the scene?" Hannon cried.

Hiram looked at Pup, whose position, as ever, remained unchanged. A guest once asked Hiram's father why he never came out from behind the desk.

No one ever got Pup's jokes. New England humor was too dry for Midwesterners.

Pup stood, puffing his cigar (his only indulgence. It cost plenty--triple what a pair of trousers cost--to have 7-20-4's freighted from Manchester.)

Hannon gazed about. "When the crazed drummer assaulted the amanuensis, where was she?"

"And you rescued her!" Hannon cried encouragingly.

"Grabbed a chay-uh. Givim a whack with it. Alls I done."

"Let's reenact your heroism! Hold the chair as you did when the salesman attacked the steno girl."

"Would. If the chay-uh was heah. Broke when I whacked him. After the police come, it went in the incinerator."

"Well…just pick up one of these chairs."

Hiram frowned. The remaining chairs were moved after the ruction, no longer facing the desks so guests could dictate to the girls. He'd fix that later.

"Ain't none'a these the chay-uh I used. These was innocent bystanders, y'might say," Hiram replied. Pup smirked slightly at this.

Hannon gave up. "Fine!" he cried, moving to the camera and setting off the flash. "You know, folks around here respect me. They want to be in the news!"

"We ain't from 'round heah," Hiram said.

"I can tell. Eastern accents. Maybe you should go back there," Hannon muttered.

Hannon looked at Hiram. "Really? What'd you do?"

Hiram shrugged. "Killed a newspaperman for sassing me."

Hannon gaped, then hustled out wordlessly.

Okay, all bitching aside, this was fun. Reminds me of the writing exercises I used to do. If you haven't tried this yourself, you should. The photo is strangely evocative and if you stare at it long enough, you find yourself considering other mysteries than where the hell this place was For instance:

Why aren't the spittoons deep and curved? These dog-bowlish ones are so flat and shallow, I think there'd be a lot of spray.

Why is there a sink next to the radiator?

Why is the newspaper rack next to the stairwell empty? Why is the lobby empty?

And what is up with the guy wearing clothes that appear to be two sizes too small?

(Actually, I answered that last question in my 1700-word ghost story.)

But this time around, the mystery I decided to address involved the row of chairs. Why there's one less chair than there are secretary desks, and why are they facing away from the desks?

What mystery in the Mystery Hotel are YOU going to solve?

And with that question, I leave you now to go read the other stories and see what mysteries the others tried to solve.

Comments:
Good story! I thought it was fun too- I got down to 299 as well and wiped the sweat off the ole brow-

11,000 words you say, I say bring it. This blog is my favourite, favourite read and I just can't get enough.

I liked the 299 word effort though, bit short but I understand that the limit was not set by you :-)

Ditto the idea of sharing your longer versions with everyone here. They may not fit the bill at Shane's place but here he ain't the boss of you! I have read many of the entries Shane has posted & I have to say Peter De Wolf's made me laugh my ass off. I highly recommend it.

Well, rest assured your story is well done and funny (but then I'm from New England ;)

I'm a little more paranoid about having my story out there now, but what can ya do?

Also, I love that despite the 300 word limit, your commentary about triples the length of the entry.

Agh! This Mystery Hotel is permeating the entire blogsphere!!!

The Mystery Hotel burns to the ground.

I've never been able to write short, either. But am trying to force myself to do so now! Am discovering that, miraculously, I can write short blog posts! *gasps & faints*

Post the other versions - you know we all want to see them!

It's hard to write to a limit; I can't imagine how you would do it daily, although it might be fun to take a crack at the *editing* side some time... The idea of stripping paragraphs down, while keeping the essence and voice of the writer intact is interesting - it makes me wonder what we (as readers) dont' get to see!

I handed the stranger another picture. She took the black-and-white image of my great-grandfather and stared at it like she had the others.

“This is as far back as the picture family tree goes. We don't know much about it. It's a hotel, a great-grandfather standing behind the counter. I have no idea who the other guy is. Family legend has it that he lived there with my grandmother. It looks like a pretty cheap place.”

“A family trait even to this day. Your father was never one for staying in fancy hotels either.”

We both had a chuckle over that, a funny memory on a day of such pain.

“After your father died, it took me a couple of years to work up the nerve to contact your mother and you. And it must mean something that I showed up on the day of your mother's funeral.”

Something must've showed that I didn't feel because she reached over and stroked my head the way my mom used to.

Then she said softly, “I can stay. I am your stepmom.”

And at that moment, stranger turned into family and I wasn't alone anymore.

I just had to take your questions literally. And maybe I'll get a story written later tonight...

Why aren't the spittoons deep and curved? They could also be ashtrays. Depends on the area of the country. Also, by 1920, spitting indoors was generally frowned upon.

Why is there a sink next to the radiator? Amazingly common when buildings were retrofitted with steam heat. Good way to get steaming-hot water; if this hotel is connected in any way to a train station, people would be coming in covered with ash and need to wash up.

And what is up with the guy wearing clothes that appear to be two sizes too small? No idea. Your story is probably as plausible as any other.

Why there's one less chair than there are secretary desks, and why are they facing away from the desks? The desks are probably for hotel guests - I have one from a hotel in Ashbury Park. Hotels used to put them in the lobby. The other chairs may possibly be facing a window, or a radio.