In Which We Tell Our Fish Stories... 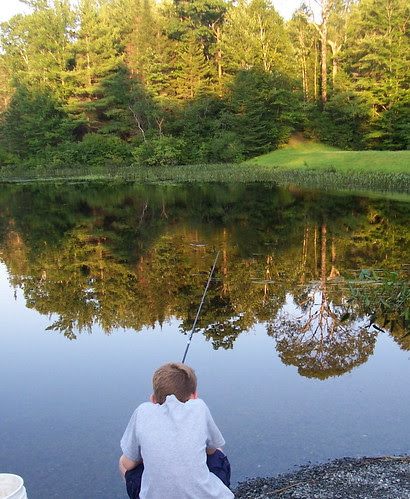 Overheard while a certain old man and his grandson were fishing one evening at sunset:

Thomas: I caught another one! It--what IS it?

Papa: Let's have a look. Is it another trout? (looks) Oh hell, that there's a little hornpout. 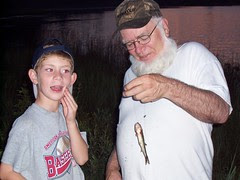 Papa (grasps the fish carefully and begins unhooking it from the line): I dunno the scientific name for 'em. Prolly some type of catfish. We always called them hornpouts because of that big fat lower lip--see the pout? And watch out for the whiskers on either side. They are some sharp and they sting like a mutha. But they are good eatin' now I'll tell ya. When I was a sprat, we had fish fries up at the town hall and hornpout was pretty much the main course. They fry up good in corn meal and I could eat about a hunnert in one sitting.

(Papa plops the hornpout into the catch bucket. Thomas observes him).

Thomas: He does look like a catfish. Do we have to eat him? Can we let him go?

Papa: Cawse you can. Or you might want to keep him. Hornpout are some smart. And they make good pets.

Papa: Yessir. Din't I ever tell you 'bout my pet hornpout, Whiska?

Papa: He was a good pet. I caught him just like you caught this one. Had him in a bucket too. But you know, after a while, I got bored carrying him around in that heavy bucket. So every now and then I'd take him out and let him flop somewhere on the grass.

Thomas: No way. Didn't it kill him?

Papa: Nossir! I told you hornpout was smart. I'd leave him out a few minutes at a time, then put him back in the catch bucket where he could breathe in the water. But eventually, he got so he could stay out of the bucket longer and longer. By the end of the summer, he didn't have to go in the water at all. He was a good pet. Smart as a dog, and he'd follow me around, thrashing his tail in the dirt to keep up with me.

Papa: Cawse! I told you hornpout was smart. Ain't every fish can learn the trick of breathing on land ya know. Whoa! (attends to his fishing pole, which is suddenly bending with the weight of a fish).

(Thomas stares out across the pond, mulling the story over while Papa wrestles with a brown trout that finally gets away).

Papa: Aw hell, thought I had him.

Papa: Well, I guess he jerked the other way when I tried to set the hook in him and he got--

Thomas: No, not that fish, the other one?

Papa: Well, one day I was walking to my Grammy's house and Whiska was flopping along behind me. We come to the bridge and when I got to the other side, I turned and saw Whiska was gone! I ran back and saw a knothole in a wooden plank of the bridge and knew he musta fell through into the brook below. So I scrambled down the embankment to get him back. But by the time I got there...well sir...it was just too late. He was belly up.

Incidentally, I fell for the same tall tale when I was about 7, too. 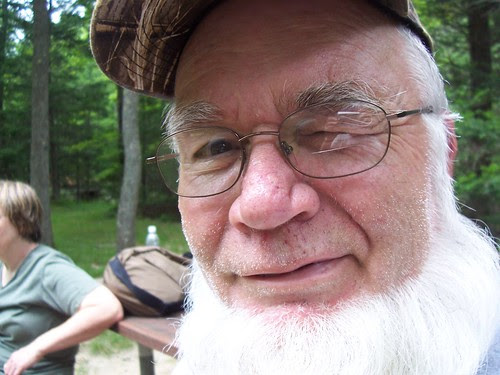 Comments:
That was wonderful. Waht great photos too, so cute. also liked the donut pics.

I could hear the voices in this story...oh I hope it was from the story, heh.

great stuff here!
Just passing through sounds like you are having a terrific holiday. Watch out with the tubes!
cheers,
Candy howling
http://gnosticminx.blogspot.com/

Dude...your dad has one bad ass lookin beard. He ever work the department stores around christmas time? With the tall tales he tells, I'm sure he could get some little suburban kids knickers all in a twist with some holiday tale of yore...

Apparently the ability to spin a good yarn is genetic too. ;)

That might be the cutest thing I've ever heard! Adorable. Your dad looks *just like* Santa Claus!

I remember falling for the one about my Dad's pet dinosaur hook line and sinker when I was Thomas' age.

Sounds like you're having a great vacation, have a safe trip home when you leave!

Yay! That was outstanding. You can see where Thomas gets the ideas for his stories, such as SuperPig, it's in the genes.

Ayuh, that story, accompanying pix, and NH accent are just about perfect.

So, MM, have you ever contemplated growing a Santa-Claus-to-be beard? (If so, you need to cough up photographic proof!)

That story is priceless- I will have to remember it for my grandchildren :)

This reminds me of the dad in the movie Big Fish. He knew how to spin a good yarn too!

That warmed my heart and made me miss my grandpa.

HOW. FUNNY. That seriously cracked me up - and I almost snorted water out my nose when I saw the picture of your father. Excellent. :)

Your dad is so huggable looking! I love it. What a great Grandpa.

hahaha, great great story. Wow, the art of the tall tale. Things like television and movies pale in comparison to a well told story, especially a whopper like that one!

That is so sweet! I love your dad. Thomas is lucky to have such a cool Papa.

I love those kinds of stories, passed down from one gullible generation to the next. My favorite is one that I suspect you also might know, MM. The "I was a dog in another life" story?

If it doesn't ring a bell, here's a brief description. Great one to tell a youngster.

You (the parent, or other elder) start by making some comment concerning dogs. It can be anything - "Look at that dog over there!" will do.

You then tell the gullible child that YOU were once a dog before you were reincarnated as what you are now (which we assume is a person.)

Gullible child, unless extremely gullible, expresses doubts about this.

You say, "No, it's true. As a matter of fact, I'll tell you a little story about when I was a dog. One day, I was chasing this rabbit and the rabbit ran out onto the road. I ran out after him, but a Buick hit me. It broke my front leg in two places - my paw and my shoulder. Hurt like hell, too. The veterinarian had to put a pin in my shoulder and there was always a big lump there, under my fur, from then on."

Gullible Child says, "Aw, go on", or something similarly disbelieving.

You say, "No, really! As a matter of fact, even though I was reincarnated as a human, I still have that lump in my shoulder. Feel my shoulder."

"Go ahead. Feel my shoulder."

GC does so, at which point you turn towards him/her barking furiously, scaring the living bejeezus out of GC.

At least, that's how it worked with my Dad and me.

Not only that, but one day hopefully you'll be lucky enough to tell that story to your grandson . . .

I'm fairly certain my Dad pulled that on me too, as some point.

Jezus Crist, that is a great story and a fabulous photo to go long wit....

how fun for your kids (and you).. I love seeing my kids with my parents.