The Apple and the Tree...

We have reached safe harbor--the inlaws. There is much oohing and ahhing and jostling for position with the baby, who we are more than happy to surrender. Of course, she isn't crying now. Her vast tear reservoir must surely be empty. In fact, she cried out so much moisture on the ride here she should look like one of those dried out Egyptian mummy-babies.

But instead, she's gone into perfect, glowing, happy fat, baby mode. She's batting her eyelashes and giving gummy little smiles and emitting sounds ("Aahma-GOO! "Haa-gee!") that will guarantee mental enslavement of her grandparents. Who are already holding her up to one of the many family photographs on the walls of the house and playing the game that never gets old: Who Does She Look Like?

I've never quite understood the lure of this game. I mean, obviously we're genetically linked so physical similarities are a matter of fact, right? But they have to see it with their own eyes. And so we know that Thomas looks like his mother, but only around the eyes and nose; the Brownie is almost the spitting image of her grandmother when she was a girl. But the Éclair is a head-scratcher. Yes, she looks a little like Thomas AND the Brownie did when they were babies, but you expect that. They need to prove the genetic link into another generation. But the Éclair won't match up.

It apparently doesn't occur to them that there's a whole other side to her lineage until I produce this gem, which my dad always kept in his wallet. 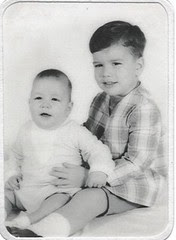 There's a long pause while the judges compare it with a recent photo. 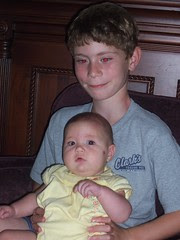 "Well," says my mother-in-law at last. "Maybe it wasn't the mailman."

Labels: answers on a postcard

Comments:
Aren't in-laws great? Drop me their address and I'll fast-track you some valium, or at least a good bottle of bourbon. Sounds like you could use some painkillers.

I'm adopted and was raised by 3 incredible parents, with 5 siblings and a plethora of extended family. I think that I'm reasonably well-adjusted, healthy, and definitely happy in my life. I met my biological family (or, at least a majority of the maternal side) for the first time when I was in my early 30's. For the first time in my life, I was in a room filled with people I actually resembled -- it was very weird and cool, all at the same time. All that to say that while it's a cool thing to wonder who you look like, the more important thing is who you ARE like.

When I announced I was pregnant, my dad joked that he'd congratulate The Banker once the paternity test came back. When Becca arrived, the spitting image of her dad, my dad groused, "Well, guess we won't be needing that test.." I think saying stuff like that is what in-laws *do*.

I think she meant to say that the mailman would not have aspired to the natty plaid jacket and snapping Bermuda shorts.

A compliment, back-handed, but she meant well.

Good to have you back my friend.

CB
vituperative as always.
and you made me look up the spelling of that!

Aww, you and BB were so cute!

I'm enjoying these answers on a postcard so far :)

my son really looks more like me, although he really has the best of both parents.

My daughter, however, looks EXACTLY like my mother. uncannily like my mother, with a little bit of the hubby's mother thrown in. It is a little unnerving.

I love the Answers on a Postcard thing! I can catch up without having to stay up all night (or all week! badumpa!)

I can't believe how big that little Eclair of yours is getting! Time flies.

That's one cute baby you have there. I guess your in-laws are jealous she resembles you more than a member of their family. Oh well, at least you don't live in the same town as them.

Omg, roflmao! You got me~ I mean, waddaudo?

Glad to hear you made it safe and are having such a (:good time:)

She is the spittin image of you. Saves money on a DNA test. :)