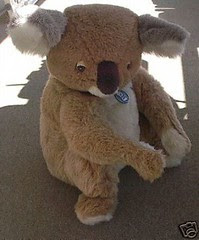 I don't think I impressed upon you quite enough how unusual it is that I should find a stuffed animal in my parents' house. For years they were banned. That's because they caused more fights between my brother and me than just about anything else, including who got the bigger slice of pie for dessert and what the hell I did with all the accessories for BB's S.W.A.T. action figures.

First, there was Big Bear. He was, well, a big bear with a wind-up music box in his back and eyes that glowed red in the dark. I believe this was a very old bear and I seem to remember being told that his eyes glowed because they contained some kind of radium. What a fine toy to sleep with every night.

And of course BB coveted him because he had been BB's before he was mine and even though BB was too old to be sleeping with stuffed animals, he regularly attempted to divest me of Big Bear--once by the novel method of lowering a noose down from the top bunk and snagging him. He was foiled when the key on Big Bear's music box got hooked on the edge of the bed and he began warbling "You are My Sunshine," whereupon I woke up and grabbed Big Bear's legs, which were so well attached that BB ended up hauling ME out of bed and my head got stuck between the bed and the wall and my screams brought the authorities and Big Bear was taken away.

That Christmas, my brother and I each got our own bear: BB got a small brown bear that he called Cappy and I got a soft white koala that I named Wally. But BB was embarrassed to have Cappy, so he gave him to me, but...well, you can see where this is going. Eventually, BB decided he wanted his bear back and so another tug-of-war ensued, only Cappy proved not to be made of as stern a stuffing as Big Bear and, during our battle, there was a terrible ripping sound and BB ended up tearing off the head of his very own bear (evidently, "Cappy" was short for "Decapitate").

I loved Wally and lived in fear that BB would avenge himself on my bear, so I hid him. So well that a few days later, when I went to look for him, I quite forgot where I put him. When I cried to my Mom about it, she sternly announced that too many bears had suffered in this house and henceforth there would be no more (thereafter, I suspected she had disappeared Wally, perhaps sent him into a Bear Relocation Program). And so it went.

Now, 33 years later, I'm on my hands and knees in a stifling crawlspace, pulling out box after box of crap and discovering things I never knew we had: sheet music from the 1920s (we never had a piano in the house, growing up); a collection of 1950s era instruction booklets for appliances I'm certain we never owned (such as a top-loading GE dishwasher). Hurricane lamps. Bolts of heavy wool plaid fabric. In a box containing four hand-sewn, child-sized Nehru jackets (one of which I remember seeing upon my own luckless self in an Easter portrait shot in the early 1970s), I find two taped-up shoeboxes. One contains an assortment of spooled thread.

The other contains Wally.

Unfortunately, mice burrowed up through the bottom of the shoebox and made a nest in Wally's stomach. He looks like a performer in a reenactment of an Alien movie in which all of the characters have been portrayed by stuffed animals.

I shake him loose and the room becomes a festival of soiled stuffing and mouse turds and hoarded birdseed from God-knows-where.

Just then, BB walks into the room to gather another boxload of stuff to throw out. He sees my old bear in my hands for the first time in 33 years, but you'd think it had only been 33 seconds ago, so fast is his reaction. In a beat, he muckles onto that bear's head. He pulls. I pull back. There's a tearing sound and I fall back into the boxes, holding only my bear's legs and ass.

"Revenge, Cappy! Revenge!!" BB screams. Then he does an ungainly pirouette of victory and dances out the door.

Labels: answers on a postcard

Comments:
My mother installed the LOLI program (Label Or Lose It) program in 1977 to prevent just such fights. It worked pretty well, actually. However, your story is funnier.

So's who's the one in the photo?

I think that video of said pirouette could be successfully used as blackmail against BB for years. But there's never a video camera around when you need one.

HAHAHAH I LOVE IT

There was a piano in Grandpa George's house when I was a kid. Maybe that's where the sheet music came from.

Next time you are here have me over, maybe the two of you can avoid killing each other then LOL

I think this is the quote of the summer.

I needed a good laugh this morning. Thanks.
Isn't it interesting that she saved that particular bear and no other.....and the two of you should come across it at this time?

“In the magical universe there are no coincidences and there are no accidents. Nothing happens unless someone wills it to happen.”

OMG~ what memories you brought back.

My sister and I tore the head off my cousin Jeff's "Pooh Bear" one time and he just howled! I can still hear his East TN accent~ Pooooooohhh!

My mom and her sister (being the quick thinking woman they were) dressed up as doctors and performed "surgery" on Pooh. All was righted in the house..for a while.

When my mom died, one of my sisters was such a foul creep at the funeral and the ensuing digging through all Mom's stuff, I wanted to pop her one repeatedly. She wanted every small thing that had belonged to mom, down to old sweaters. I caught her stealing an old cardigan of Mom's out of my suitcase one night because, as she put it, "Merujo, you're too fat to wear it anyway. So, I'll just take it..." Yeah, she's a gem.

At one point, I found a box of 1960s Girl Scout stuff in the attic, including a Brownie beanie, covered in mouse poo. My obnoxious sister bounced into the living room where the rest of us - all quite tired of her antics - had just discovered the remarkable quantity of mouse poo. She grabbed the skanky beanie from the box and started raving about how it was hers and she *needed* to have it, blah blah blah. We initially said nothing when she crammed the diseased felt onto her freshly blow-dried hair. We waited about ten minutes before we told her.

God, that was awesome.

Nice to meet ya! Got here through Alpharat.