In Which We Are Dripping with Love...

And so, after months of making it clear that she's perfectly happy to lie on her back and remain in the arrested state of an 8-week-old, last Saturday, the Éclair caught one look at Thomas' cache of cars and, with no preamble whatsoever, promptly flipped herself over and began crawling to them. We could not have been more astonished if we had come to get her after a nap and found her fluttering around the ceiling fan. 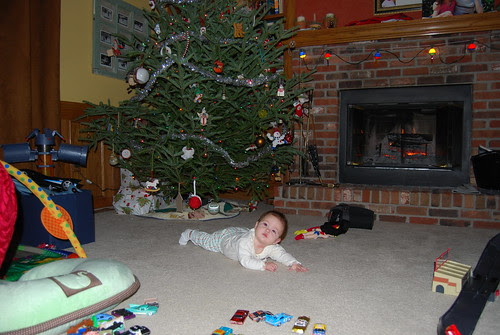 I don't remember Art Lad and the Brownie making such quantum leaps, or keeping them under wraps for as long as the Éclair seems to. After weeks of incoherent hooting and raspberrying, I came through the door from work one night, and she just looked up and said, "Oh, hi, Dada!" Then went back to spraying us with her ample reserves of saliva. I think she's discovered--too early--the disarming value of the shock reveal and the way in which it reduces us to incoherent hooting and raspberrying ourselves.

Speaking of saliva, my, is this girl a slobberchops. She actually has a yeast infection in those sneaky little folds of her neck from all the constant drooling and spitting. We just can't keep her wiped off long enough for the infection to go away. The only one not perplexed and grossed-out by it is Blaze, who sees her as a kind of moist human popsicle that never melts. He cannot pass her sitting in her little activity center without giving her a couple of comprehensively face-covering licks, to the extent that they both now exhibit Pavlovian behavior: Every time she sees the dog, the Éclair automatically squints her eyes shut and gigglingly flinches in anticipation--even though he might be on the other side of the room. For his part, every time Blaze passes her activity center, he starts licking his chops, whether the Éclair is actually sitting in her activity center or not.

This interaction has not gone unnoticed by the Brownie who has, for the most part, been the very model of a great big sister. Except when it comes to her Blazey. She'll watch him sleeping by the foot of the crib, or stationed by the activity center, ready to summon the Bringer of Milk should The Queen Baby express the slightest blat of displeasure, and the Brownie will make a sad face. "I don't think Blazey loves me the best anymore," she has confided in me. "I think he likes the baby better."

"Well," I opined, "She probably IS a little tastier just now, but I think Blaze loves you both."

But the Brownie remained unconvinced and the truth is, I'm not so sure either. Given the pack mentality of a dog, I suspect it's only natural for Blaze to look after the smallest and most helpless of pups in the house, and in that case the Éclair has definitely supplanted the Brownie. Blaze certainly does protect the baby, with perhaps a little more zeal than he does the other kids, if that's possible.

Yesterday, a man came to deliver a piece of furniture--a bedstead for the Brownie. Very nice guy, actually. But Blaze watched him like a hawk the entire time, as he does when any deliverymen enter the house when I'm not around. Then, as the guy was about to leave, he made the mistake of complimenting Her Lovely Self on her gorgeous baby, and stepped towards them, hand outstretched. Blaze freaked out. He lunged to, I don't know, bite the guy or something, but HLS spoke to Blaze in his language, giving him the warning growl that makes him back down immediately. Except not this time.

Blaze stood there quivering for a moment, head bowed under the imperious gaze of my wife, in an absolute lather of indecision. Then, he bolted up the stairs, raced into the Brownie's room and pissed all over her new bed.

When the Brownie got home from school, all of the clean-up work was done, but Her Lovely Self still felt obligated to explain what happened to the Brownie's new bed. My elder daughter has been waiting for this thing for six months and I thought she was going to burst into tears when she found out the dog baptized it before she even got a chance to sleep in it.

Instead, with more than a little glee, she went downstairs and released Blaze from his time-out in his kennel and hugged him fiercely.

"Now I know he loves me!" she cried. Blaze just gave me the knowing look of a dog who has learned the secret of keeping a woman's affection.

Clearly, I've been doing something wrong all these years.

Comments:
My baby nephew got a severe case of athlete's foot from the dog licking his toes.

Part of the cure involved keeping socks on the kids and not letting the ddog lick him.


you been reading lolcat stuff to her?

For some reason I'm not inclined to include Blaze's move on my repetoire of romantic gestures. But it does make for an amusing talke.

If peeing on the bed is the way to win a woman's heart, then this totally explains why I'm single.

That's a girl who definitely follows her own drummer! (That's the best kind, you know.)

I second the lolcat similarity!

Aww. I admit, I've been wondering how the mighty Blaze was coping with a new addition to watch and protect.

Sounds like he's managing to keep everyone in the affection loop.

that is one tasty eclair!! those cheeks are so squeezable! all you need is a bearskin rug infront of that fireplace...hats off to the brownie for being one independant minded little girl. and that blaze is one awesome dog, pee or not :)

I think I'd like to hear Blaze's version of these events :-)

hey a post from Blaze is in order for sure! Good call Suldog.

As someone who is recently divorced, has no children, and whose family lives several states away, I envy your home at Christmastime. 3 kids, a dog and a Christmas tree sound beautifully amusing.
By the way...as the author of "Made from 100% recycled drivel" and someone who is also completely honored to be on your blogroll, my URL had to change (due to aforementioned divorce) and the link most people have is no longer valid...I'm now at niffiner.blogspot.com...I'll be totally flattered if you update me! Now that the whole divorce messiness is over I plan on getting into my blog again. Merry Christmas to you and your wonderful family!

When my kids were little I used to say there was nothing sweeter than baby spit~ I guess Blaze and I can agree on that one :)

Wishing you and all yours a very Merry Christmas, Happy Holiday and Bright New Year filled with lots of good stuff!

Ha! Chelsea peed on my bed a couple of times--you can bet she did NOT get a hug after that.

was looking at baby picture by Christmas tree. The lights you have around the mantle will bubble if you keep them upright. Did you know that? They are really cool. I had them on my tree when i was a little girl. Yes that was a very long time ago. :) JAG