Suddenly, and quite to my surprise, the Eclair turned 1 today.

First birthdays are strange little pieces of property on the calendar, aren't they? I mean, as children's birthdays go, they're as momentous as they come, and certainly reason enough to be excited. But the birthday boy or girl in question is really too young to care or remember (although I sort of remember mine), making it pretty much the only birthday in which the parents are more excited about it than the child. I certainly remember Thomas's and the Brownie's first birthdays with crystal clarity, and I think it's fair to say that I looked forward to them quite a lot more than either of them did.

Thomas's was quite the event, what with him being our first child, and the first grandchild on either side of the family. Both sets of grandparents traveled to us for the event, along with Her Lovely Self's sisters and their husbands, a couple of aunts and uncles, half a dozen friends and their babies, and even some neighbors thrown in for good measure. Thomas wasn't walking then--not quite yet--but he could pull himself up and motor along just fine with the aid of a Fisher-price four-wheeled scooter/walker doohickey. One guest--a little boy named Jeffrey, who was a couple of months older than Thomas and who could walk fairly well--spent most of the afternoon following Thomas around and swiping the walker away from him whenever the opportunity presented itself. The first couple of times this happened, Thomas was left stranded in the middle of the floor or back porch without his walking aid and screamed bloody murder. But by lunchtime he'd evidently grown tired of the ignominy of crawling from wherever he'd been carjacked, and he'd been fortified by an infusion of vanilla ice cream and chocolate cake, so thereafter Thomas resolved to stand his ground. He spent the rest of the afternoon battling Jeffrey for domination of walker. I remember my mom clucking about this--that her poor grandson should have to endure a birthday of being on guard lest he lose his pedestrian aid.

But in some ways, I think it was the best gift of all. Having a peer to compete with somehow sharpened Thomas's resolve and vigilance, and gave him focus and determination, all qualities that made him seem less like an infant, more like, you know, a boy. An actual person.

I had a similar feeling when the Brownie's first birthday rolled around a few years later. As a family event, her first birthday was only slightly less momentous--we attracted just one set of grandparents (mine, of course), no other extended family, and only one pair of friends and their daughter, but I still recall it fondly. When the year-old guest of honor devours half of her birthday cake by herself--and does so using only two clumsy little hands and a single tooth in her head--you remember that as a proud achievement. Even though it means there's no cake left for you, once it's gone round to your guests and the birthday girl's big brother.

But hey, I considered it a more-than-fair trade. Like her brother, the Brownie had up to that point done very little beyond being utterly adorable. But this changed all of that. Her effort, her act of sheer will--by God, she was going to have that cake--seemed to be putting the world on notice that there was a new force to be reckoned with. And I gotta say this: I welcomed it.

As a Dad, I have to admit that at this point in each child's life, I was just a hair bored with babyhood. I mean, let's face it, much as I loved my babies and wanted nothing more than to spend all my free time with them, by the time their first birthdays rolled around, the brutal truth was that the preceding 11 months, three weeks, and six days (give or take) had been defined primarily by each child's eating, sleeping, and pooping schedule. The most interesting thing Thomas had done during that time was to start referring to me as "Dadoo." The Brownie hadn't even gone so far as to identify me by name. My daughter's moment of interest was when she discovered that the bowl from which Her Lovely Self fed her was exactly the circumference of her head. That was it.

Call me impatient, but I wanted more. I was eager to show my offspring--I was eager for them to be interested in the fact--that there was more to life than upending a bowl of food on your head or giving your father's name a slightly excretory spin. There were games of catch. There were bicycles. There were comic books and cartoons. There were hills and valleys and lakes with their name on them--up in New Hampshire, this was quite literally true--just waiting for them to explore. I had so many things to show them, it would take a lifetime (that was the point, of course) and I couldn't wait to start.

So imagine my astonishment this morning to realize that I feel the exact opposite way with the Éclair.

I suppose I have no business being surprised. I honestly should have seen this coming. I mean, I know she's the last baby--three's our limit. So it's only natural to want to savor this experience, make it last as long as possible. And of course I am looking forward to teaching her all of the things I've taught her big brother and sister,

(and my, have they gotten big) 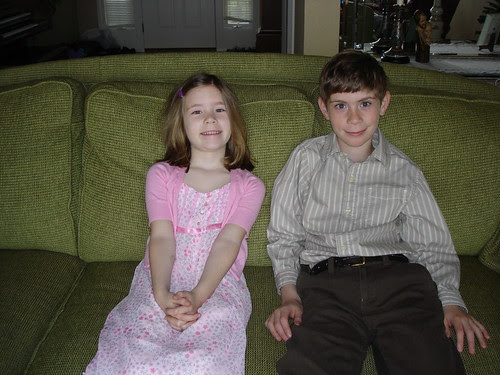 but at the same time, I'm feeling just a little sad, lamenting the end of infanthood for this little woman of mine.

Who, by the way, just discovered at lunch that she loves chocolate milk.

Especially when she can steal it from her big brother without his noticing. 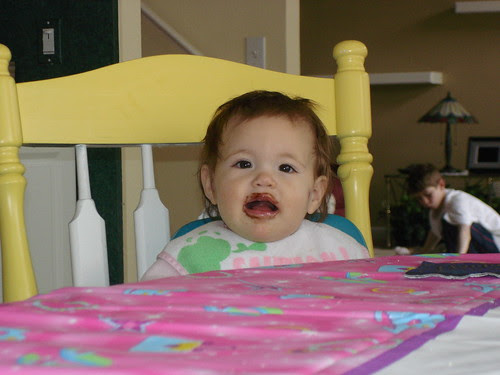 And with that, I must leave you, as there are some last-minute presents to wrap and details to see to before this evening's festivities.

Happy Birthday, little Eclair. Your Daddy sure does love you.

Happy Birthday! Hope it is a fun and memorable day for everyone at the Masthead household.

Mmm, chocolate. Happy Birthday, Eclair! I hope you all have a lovely evening, MM.

Wishing your little one many, many more solar orbits.

I had forgotten the Eclair was born the day after my birthday BECAUSE A WHOLE YEAR passed. Wow. I hope she had as much fun as I did!

mmm, a baby wearing her chocolate well. nothing more scruptious than that! happy birthday!!

I hope the sweetpea had a wonderful day, and that all the rest of you did, too. It was great to see photos of all the kids!

It's only natural that the Eclair would LOVE chocolate! She's adorable!

Holy smokes they've gotten big!! I cannot believe the Eclair is 1 already. I don't even know you guys and that makes me feel old.

Have fun at the party :)

What a good looking brood you have there MM.

Happy Birthday little chocolate covered Eclair. We love you too. :)

we cannot wait to see what this next year has you doing.

Love,
The MM readers of the world. :)

Happy Birthday Eclair!! Seems like just yesterday you were born. Congrats to MM and the entire family.

Happy Birthday! That was a beautiful soliloquy. They do so grow quickly don't they.

Wow. It seems just the other day they all were babies. Happy Birthday Eclair!